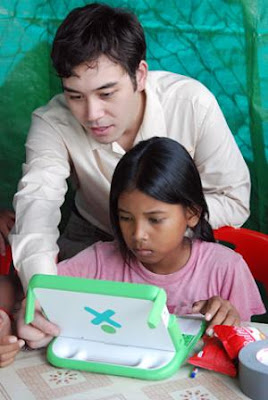 Photo: VOA - R. Carmichael
Allen Tan, a former US bomb disposal expert and now regional head of the Golden West Humanitarian Foundation, helps one of the children at a Phnom Penh orphanage with the landmine game, June 2010
Decades of war have left Cambodia with millions of landmines and unexploded ordnance that kill and injure hundreds each year. A new approach to educating children about mines was tested last week in Phnom Penh, and is likely to be rolled out to other nations in the coming years.
There is nothing unusual about children clustered around a computer screen, one of them playing a game, the others giving suggestions.
But at this Phnom Penh orphanage, the game they are playing is unique.
This is what its developers call a "serious" game - one that is designed to educate. The children are having fun while learning how to recognize the danger signs for landmines and bombs in a typically Cambodian landscape.
In a country where last year nearly 250 people - one-third of them children - were killed or injured by mines and unexploded bombs, educating the next generation on how to avoid the detritus of war is vital.
Twelve-year-old Sin, who is helping to test the game, explains that he needs to find food for his on-screen dog while avoiding the red landmine warning signs that you see around Cambodia. They aren't always easy to spot.
He says, we walk straight and if we see the red sign then we turn around and come back. Or we can turn left or right to avoid the landmine.
Professor Frank Biocca is from Michigan State University, where the game was developed as part of one of the university's undergraduate programs. Why test it here? 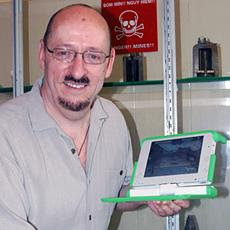 VOA-R. Carmichael
Professor Frank Biocca, one of the game's developers, holds a One Laptop Per Child Computer during his recent trip to assess the game's effect on learning about the dangers of landmines (File)
"Cambodia is a very key and critical case. This is our first test area and so we're hoping to debug various aspects of the game in this environment, because I think it represents a good representative environment of the kinds of challenges we might have in other countries as well. So if it works here, hopefully similar versions of the game will work - at least definitely through southeast Asia possibly into Africa as well - once of course we adapt to local conditions as well," he said.
Biocca says the game works on most computer platforms: PCs, Macs, Linux, the Web - even on mobile phones, which he reckons will become the cheap computers for developing nations.
Assisting with the testing is Allen Tan, the country head of the Golden West Humanitarian Foundation. It's a U.S.-based charity that provides technical advice to demining organizations.
It was Golden West that approached Michigan State University two years ago and suggested that its students write a game to educate children about mines and unexploded ordnance.
Tan, a former bomb disposal expert with the U.S. Army, says the game has potential to benefit children in dozens of countries.
"Any of these post-conflict zones are going to be targets for this kind of education, especially with young populations that might not have been around when the conflict happened, and a lot of these hazards are legacy hazards. Certainly any post-conflict zone could be a target for this type of training," said Allen.
In short, the game, which received funding from the U.S. State Department, has a potentially vast audience. 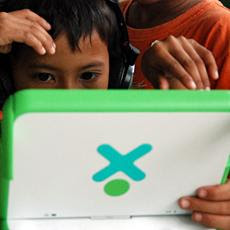 VOA-R. Carmichael
A child at a Phnom Penh orphanage focuses on playing the computer game, which requires him to find food in the Cambodian countryside while avoiding on-screen landmines, June 2010
The small Cambodian audience testing the game this month certainly enjoyed playing it. Quite how much they learned using this rather than traditional methods - such as leaflets and presentations - is something the developers will assess.
Like all of the children, 12-year-old Minea says he loved it. That is not too surprising, given that Cambodian children get very few chances to play a computer game.
Did he learn anything? If he was in the countryside and saw signposts warning of landmines, what would he do?
He says he would walk far away from that place and he wouldn't touch anything there, and wouldn't play near there.
If the game can succeed in transmitting that message to children in other post-conflict countries, then it should go some way to reducing the deaths and injuries suffered by children from this 20th century problem.
Posted by CAAI News Media at 3:06 pm