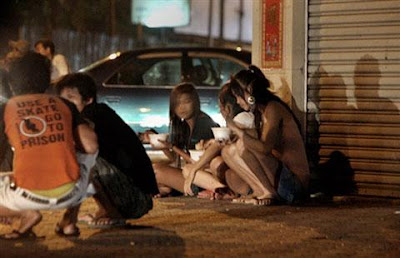 Photo: AFP
Cambodian sex workers sit on a sidewalk in a street of Phnom Penh (2008 file photo)
Human Rights Watch said Tuesday that the Cambodian government must act to end police abuse against sex workers. A new report by the organization found prostitutes in the country suffer arbitrary arrest, unlawful detention, beatings and rape by authorities.
Human Rights says its research was based on interviews with 90 sex workers, in the past year and reveals the problem is particularly acute in the capital, Phnom Penh.
Elaine Pearson is Human Rights Watch's acting Asia director. She says several factors lie behind the unlawful arrest and detention of sex workers and the further abuses that follow detention.
"We found that the 2008 anti-trafficking law somewhat contributes to these abuses because it can provide a pretext for arresting sex workers," she said. "However, we found it can also happen simply because governors order crackdowns against vice and prostitution, periodic efforts to clean up the streets and maintain public order and so on."
Pearson says the government should suspend the provisions in the anti-trafficking law that some police use to arrest sex workers.
Human Rights Watch says the government must distinguish between sex workers and trafficking victims.
It also wants those detention centers where abuses are taking place to be shut down and says sex workers would be better off in facilities run by non-governmental organizations, which it says are better-run than those controlled by the Ministry of Social Affairs.
"We don't think that sex workers should be sent to a detention center, where they're at risk of violence, of further abuse. And, really those detention centers are not providing any rehabilitative function at all," said Pearson. "There are plenty of other ways of providing services to sex workers and there are plenty of NGOs and groups that are able to provide that support. So we call on the government to work together with those groups to address these issues."
Human Rights Watch also wants a full investigation into the allegations of abuse by police and other government officials. Pearson says donors - who have provided funding to combat trafficking and to train the police - must play their part, too.
"So we're calling on donors to support these recommendations and to review their funding to the Ministry of Social Affairs and to police until their efforts to investigate these abuses and close the centers," she said.
For its part the government denies that it is unfairly targeting sex workers and says it will investigate allegations of abuse that are submitted to it.
Chou Bun Leng is the secretary of state at the Ministry of Interior, in charge of combating trafficking. She says the government wants to hear of such abuses, but it needs complainants to name those deemed guilty, to ensure an effective investigation.
She says the police are subject to the law and will be prosecuted if abuse allegations are substantiated in a court of law.
Posted by CAAI News Media at 8:09 am