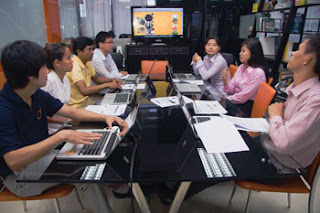 Photo by: Pha Lina
Employees of The Orange People participate in a discussion at the firm’s high-tech Norodom Boulevard office in Phnom Penh.
via Khmer NZ
Friday, 03 September 2010 15:00 Ellie Dyer
PHNOM Penh-based communications agency The Orange People sees creativity as a valuable commodity, one that has the potential to thrust Cambodia into the international spotlight.
Set up in 2008 and headed by Cambodian-Americans Nathaniel Chan and Sophy Pich, Orange People has developed from an start-up into a burgeoning enterprise employing around 35 staff members.
Marketing experts, graphic designers and animators – around 60 percent of whom are Cambodian – are among those working at its Norodom Boulevard office to produce TV shows, branding campaigns and advertisements for the private companies and NGOs.
“It is about sending a message to the target audience. We tell stories through many forms,” said Orange People Chief Executive Officer Nathanial Chan.
In a domestic market where global giants such as Bates 141 and Ogilvy operate, the company has developed big ideas to differentiate itself from rivals backed by international corporations. Diversifying from traditional branding methods, the company has used “social marketing” to spread brands through new media, TV and word of mouth.
For example, it created a touring television show called ‘You’re the Man’ for NGO Family Health International.Its aim was to challenge traditional male cultural roles by encouraging youths to prove themselves through cooking trials, personality tests and physical competitions.
“You are selling a message and a vision to try and impact change and more positive behaviour,” said Managing Director Sophy Pich, explaining that the show aimed to promote social responsibility amongst young men.
Orange People is also looking ahead to diversify the outlook for the Kingdom’s creative businesses. It is investing in technology to enable outsourcing to the United States. They hope American firms will be attracted by comparatively low Cambodian rates.
As Chan points out, much of the hit cartoon The Simpsons is made in South Korean animation studios, while Argentina has a burgeoning creative outsourcing sector.
“We are very technology-driven and want to put infrastructure in place so if you are sitting in New York you can see what is happening on a second-to-second basis,” he said.
“But having recognition on a global scale – it can’t be accomplished alone. It needs the backing of the entire industry.”
Chan said unity needs to be developed within the Kingdom’s growing marketing and advertising sector, which as yet does not have a cohesive voice and was hit hard by the global financial crisis, when many ad budgets were cut.
Among the survivors of the crisis, competition is still fierce. Chan talks of a “price war” among companies that compete for business through a bidding process.
“That’s how we feel at the moment, although we cannot speak for the entire industry,” he said. “But if we are just focused on competition we are forgetting about the bigger picture five to 10 years from now. We need to move forward as a sector.”
Sophy Pich said he believes skills have to be valued. “We have to stick firm on quality over price,” he said.
And Orange People must keep a close eye cash flow. It is especially important in an industry where clients pay a portion of fees upfront.
Though Chan declined to discuss exact finances, besides saying that the firm had no monetary concerns, he emphasised that “diligence” was needed to balance creativity with cash.
Posted by CAAI News Media at 11:36 pm