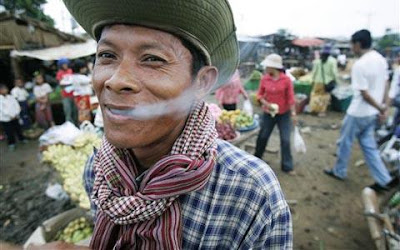 Photo: ASSOCIATED PRESS
An unidentified former soldier looks on near the once Khmer Rouge-stronghold border town of Pailin, Cambodia.
“I want the court to limit [indictments] to just five individuals, because it has not found the real murderers.”
Residents in the former Khmer Rouge stronghold of Pailin told a delegation from the UN-backed tribunal last week they do not want to see the prosecution of further cases at the court after the second one is completed.
Andrew Cayley, the international prosecutor for the court and head of the delegation, told the residents that no more than 10 people would be further prosecuted in cases No. 3 and No. 4.
The Sept. 22 trip was part of a series of fact-finding missions Cayley has taken since his inception as prosecutor at the beginning of the year.
The tribunal has successfully tried one Khmer Rouge soldier, Tuol Sleng prison chief Duch, and it is preparing to try four senior leaders—Nuon Chea, Khieu Samphan, Ieng Sary and Ieng Thirith.
But indictments beyond that have proved a contentious issue in the hybrid court, which includes international and national prosecutors and judges.
In Pailin, a Khmer Rouge stronghold until 1996, former cadre are not convinced the court will not expand its scope.
“I want the court to limit [indictments] to just five individuals, because it has not found the real murderers,” said Phong Pheoun, a 49-year-old former soldier in Pailin. “In fact, the Khmer Rouge were patriots. Some high-ranking Khmer Rouge did everything only to defend the nation and the people. They did not kill people.”
Horn Siha, deputy chief of '75 Village, in Sala Krao district, said tribunal investigations were a waste of time.
“If we go deeper, the story will be far from over,” he said. “It already took nine months just to try one person, so if they have to do it with 10 people, for example, how can the country move forward and develop?”
There are also sentiments here that the tribunal is already holding the wrong people.
“They are also victims of the regime,” said Mek Mak, the deputy governor of Pailin.
Khieu Samphan, the nominal head of the regime who will face trial next year for atrocity crimes, including genocide, “only performed administrative tasks, like making phone calls, during that time,” Mek Mak said. “So how can he be a murderer?”
He put the blame on Pol Pot, the general secretary of the Communist Party of Kampuchea, who stood at the head of the Khmer Rouge and the heart of the regime known as Democratic Kampuchea.
But Cayley, the international prosecutor, said the tribunal could not try a man who was already dead.
“The investigating judges have found sufficient evidence to prove the accused committed the crimes,” he said.
Posted by CAAI News Media at 1:10 pm