via CAAI
By Matthew Russell Lee
UNITED NATIONS, October 29 -- Before UN Secretary General Ban Ki-moon left on his four country trip through Asia, the UN Special Rapporteur on Health issued a report specifying violent anti-drug programs in Cambodia and Vietnam.
Inner City Press asked Ban's spokesman Martin Nesirky if Ban would be raising this issue, and was told to await incremental reports of what Ban raised.
In Cambodia, after political gatherings were banned in Thailand and a petitioner beaten unconscious in Phnom Penh, it was directly reported that “funds from the United Nations are being used to run a brutal internment camp” to which “undesirables” were sent to be “raped and beaten, sometimes to death.”
Inner City Press, which has reviewed each stop along Ban's tour, wrote about this Prey Speu camp on October 28, and on October 29 asked Nesirky if Ban was aware of the issue and had raised it to Cambodian authorities.
Nesirky replied that “UNICEF and the High Commissioner for Human Rights, her Office, will be very happy to answer you questions.”
But what about Ban? Even on the petitioner who, trying to get a letter to Ban, was beaten unconscious by Cambodian authorities, Ban said nothing, relying instead on the Deputy High Commissioner for Human Rights.
Beyond passing the buck to UNICEF and the HCHR, Nesirky nevertheless offered this spin, that the “other reports” asked about by Inner City Press followed a Guardian story, which Nesirky said was “an extrapolation from funding to a ministry, not direct funding to a specific institution.” Oh.
Inner City Press asked this and other questions to UNICEF, and received only this in return:
Subject: Re: Q re Cambodia/anti-drug referred by OSSG, old Q re malnutrition in Sudan referred to UNICEF by OCHA [and another]
From: Christopher de Bono @unicef.org>
To: "Matthew R. Lee" @ innercitypress.com>
Date: Fri, Oct 29, 2010 at 2:02 PM
Re Cambodia
- UNICEF Cambodia is always concerned when allegations of this nature arise, particularly when they involve children.
- We do provide vital support to the Ministry of Social Affairs, Veterans and Youth Rehabilitation (MoSVY) to strengthen standards and systems in child protection. We do not, however, work directly with the Prey Speu centre, nor do we provide any funding to Prey Speu and are confident that none of our funding goes to this centre. Withdrawing our funding to MoSVY would not be in the best interests of children in Cambodia.
- In the case of Choam Chao, we did not withdraw funding, but engaged the government to change its strategy, which it did, and this resulted in the subsequent closure of the centre.
- UNICEF is aware of the need to document the situation in centres like Prey Speu across Cambodia and we are working with OHCHR to provide technical assistance to the government to strengthen systems to prevent such abuses happening in the future.
On Sudan I have no information beyond what was previously made public by our Representative Nils Kastburg.
On [the other] I will ask colleagues in the field. 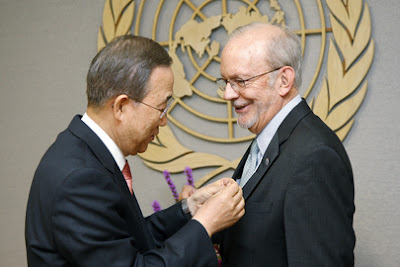 UN's Ban & UNICEF's Lake, rapes at Prey Speu not shown
Here's from the Sidney Morning Herald:
“funds from the United Nations are being used to run a brutal internment camp near Phnom Penh, where detainees are held for months without trial, raped and beaten, sometimes to death. The Cambodian government's Ministry of Social Affairs says the Prey Speu 'Social Affairs Centre' 20 kilometres from the capital is a voluntary welfare center... But human rights groups say the government-run centre is an illegal, clandestine prison, where people deemed 'undesirable' - usually drug users, sex workers and the homeless - are held for months without charge or without ever going before a court. Detainees - men, women and children are housed together in a single building - are regularly beaten with planks of wood, whipped with wires, or threatened with weapons. Gang rapes by guards are reportedly common, and it is alleged guards have beaten three detainees to death. But the ministry that runs Prey Speu still gets money directly from the UN's children's fund, UNICEF.”
Does Ban Ki-moon as the head of the UN system this this is acceptable? We still don't know. When Inner City Press asked if Ban would raise the wider violent anti drug program issue in Vietnam, Nesirky said Ban is still there. Watch this site.
From the UN transcript of October 25, 2010 --
Inner City Press: I want to ask about the Secretary-General’s impending trip to Asia. There is a report to the Third Committee by the Special Rapporteur on the right to health about, among other things, what he sees as the violated practices in anti-drug programmes in many of the countries that Ban Ki-moon is going to be visiting — Cambodia, Viet Nam, Thailand — and he calls very strongly for the UN to move against people who are incarcerated. This is all according to his report. I just wonder: of the many issues obviously on the Secretary-General’s agenda as he visits these countries, is he aware of that? And there is a separate issue in Cambodia, where people has said that they are going to try and rally in front of Ban Ki-moon about evictions, forced evictions, in Cambodia. Are these… Can you sort of… Can we get a run-down of what issues he is planning to raise, and I just wonder whether these two are among them?
Spokesperson Martin Nesirky: Sure. And again, I seem to recall that Farhan gave you a bit of a run-down on the trip last week, sitting here. As the trip progresses, we will be giving details. The Secretary-General and his delegation are en route at the moment to Thailand where, as you know, the visit starts. They then move to Cambodia and on to Viet Nam for this UN-ASEAN [Association of South-East Asian Nations] meeting and then to China, where, as you know, the Secretary-General will be visiting Shanghai, Nanjing and Beijing. On the question of health, the very specific point that you raised, we can find out and probably tell you as the visit progresses. The same goes for the second part that you mentioned.
Posted by CAAI News Media at 5:58 pm