Cambodian stampede had air of inevitability

via CAAI
Was aThe appalling human tragedy during the annual Bon Om Touk Festival in Phnom Penh was not only predictable but also preventable
Published: 28/11/2010
Cambodia's Rainbow Bridge tragedy is the country's biggest peacetime disaster, and the world's second worst such calamity after a similar stampede across the Tigris River in Baghdad left about 1,000 dead in 2005. 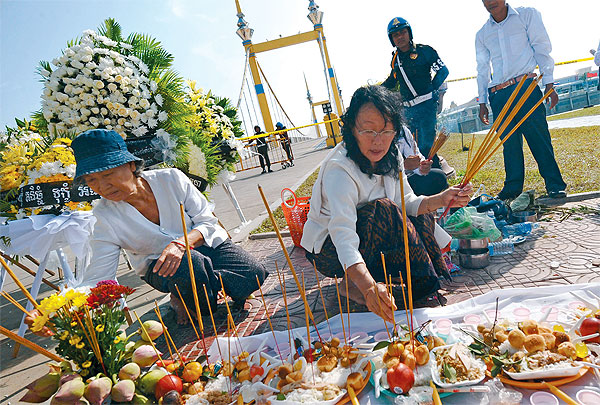 AFTERMATH: People place offerings and incense sticks for the victims of the stampede near the Diamond Gate bridge.
Rumours, panic and flight dominated both catastrophes as the sheer weight of numbers at this year's Bon Om Touk, or Water Festival in Phnom Penh resulted in an extraordinary death toll.
At the last count 347 (seems to be the most recent figure) people, mostly women, had died and at least another 755 were injured on the suspension bridge that linked the recently developed Diamond Island with the Cambodian capital across the Bassac River.
The response _ dominated by the blame game, the launch of special investigations, a day of mourning, pledges of financial support and condolences from across the globe _ was sadly almost as predictable as the crush itself.
Government spokesman Khieu Kanharith perhaps encapsulated the perspective of authorities before Monday evening's tragedy when he told journalists that police had been more concerned with pickpockets and boats capsizing than ''this kind of incident''.
The facts speak for themselves.
Completed earlier this year, Rainbow Bridge, also known as the north bridge, was a one-way route providing access from the island _ known locally as Koh Pich, or Diamond Island _ to the city. A second bridge, designed for people heading the other way, was closed.
On the final night of the three-day Water Festival a 10,000-strong crowd surged across the walkway towards a free concert. The number of people got out of hand, the crowd began pushing from both ends, the footbridge swayed sparking panic due to fears of a collapse, which led to the stampede. Rumours circulated among the trapped and frightened crowd that a fight had broken out. People leapt into the river and drowned. Others were trampled, suffocated and died of internal injuries.
Then witnesses said police started firing a water cannon into the crowd, possibly in a naive attempt to get people moving. But this just aggravated the situation by saturating the lighting and electrifying parts of the span. Authorities insist nobody was electrocuted despite eyewitness accounts contradicting this.
Tragedies in Cambodia always seem to have an air of inevitability about them.
The anti-Thai riots in 2003 and the massive slum fires around the same time, 40-odd land mine victims a month, floods, droughts and a high level of street crime amid police corruption and a culture of impunity have marred this country's return to peace over the past 12 years.
The trade-off has been the fulfillment of a national yearning to reconstruct Khmer culture, which had been dismantled by the the Khmer Rouge, 10 years of Vietnamese occupation and ongoing civil conflict for much of the 1990s.
Bringing back Khmer dance, music, traditional New Year, the Water Festival and annual boat races was helping get life back to ''normal'' for Cambodians.
The Water Festival heralds the end of the rainy season when the Tonle Sap is filled to the brim and reverses direction, feeding back into the Mekong River. It's when country folk come to town that the numbers can be terrifying. Three to four million people, or 20-25% of the country's entire population, are crammed into a few square kilometres of the capital.
Families hold onto each other and weave through the crowds along Sisowath Quay in file with one hand on the shoulder of the person in front hoping not to be separated or lost, all angling for the best view of the regatta.
The country cousins can be seen inspecting the buildings, restaurants and shops that have turned Phnom Penh into a rapidly modernising city.
For the most part, Phnom Penh is safe during the Water Festival, however, Cambodian crowd control measures are atrocious. Foreigners and middle-class Cambodians who live in the city know what to expect, and for more than a decade they have made an exodus during the festival.
At the official mourning ceremony on Thursday, Prime Minister Hun Sen shed tears as he paid his respects to the dead while the government noted in an official statement: ''This tragic, untimely and unexpected loss of many lives will remain a bitter and painful memory for Cambodia.''
Phnom Penh Governor Kep Chuktema sounded a similar note amid calls for his resignation, telling journalists this was ''a huge lesson for me and other authorities in preparing for such large events in the future This is an incident that no one wanted to happen, it happened unpredictably.''
City police chief Touch Naroth was a little understated but closer to the mark when he said sudden movement on the bridge had terrified the festival-goers, many of whom were from the provinces and unfamiliar with such bridges.
By most accounts Touch Naroth's men did their best after the stampede had taken its toll. But the prime minister has never favoured a fully professional police force, and prefers a patronage system that rewards loyalty over ability.
The Hong Kong-based Asian Human Rights Commission issued a report saying there were contradictory accounts about what instigated the stampede _ crowd antics, poor bridge construction or a failure by the authorities to control the crowd.
''In addition to death by crushing, suffocation and drowning, there were multiple deaths due to electricity,'' it said.
The report noted it was clear Phnom Penh was unprepared for any large-scale disaster.
''Responses by police and military were lacking and may even have contributed to the stampede while hospitals were overwhelmed. Emergency and medical personnel resorted to piling bodies together, covering them with mats or sheets.''
When the authorities investigating the tragedy ask themselves who could have seen this coming, the answer really should be everybody. When they try and figure out exactly why so many died last Monday, one also hopes they will look at themselves and the man who employs them.
Posted by CAAI News Media at 11:41 pm