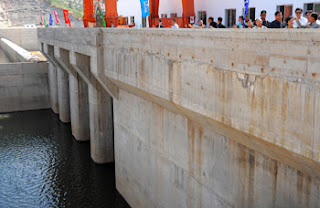 Photo by: AFP
Prime Minister Hun Sen and Finance Minister Keat Chhon at the opening of the first stage of Kampot's Kamchay dam in late 2008.
via CAAI


Cambodia and China have signed an agreement to study the feasibility of four proposed hydropower dam projects amid fresh concerns about the long-term environmental impact of Mekong dam developments.
Suy Sem, the Minister of Industry, Mines and Energy, said the agreement was one of 16 signed on Thursday during meetings with a visiting Chinese delegation led by Wu Bangguo, chairman of the standing committee of China’s National People’s Congress. .
“The signing of these four hydropower dams will allow the companies to study the feasibility of the projects,” he said after the meeting.
“We will discuss this in detail after the completion of the studies, and then will allow for the construction.”
The agreement will pave the way for two state-owned Chinese firms – China Huadian Corporation and China Guodian Corporation – to conduct feasibility studies of the proposed 108-megawatt Cheng Areng dam in Koh Kong and the Srepok III (340 megawatts) and Srepok IV (230 megawatts) projects in Stung Treng.
The firms will also study the feasibility of the Sambor Dam project, planned for the Mekong mainstream in Kratie province, and decide whether the government should proceed with a 460-megawatt option or a more complex 2,600-megawatt design for the site.
Suy Sem did not reveal the total cost of the four proposed projects, but said construction could cost as much as US$1.5 million per megawatt of generating power.
The announcement comes on the heels of a recent report, commissioned by the Mekong River Commission, which argues that dam developments slated for the Mekong mainstream could have far-reaching impacts on Cambodia.
The report claimed more than one million fisheries-dependent people were at risk from the impact of Mekong dams.
The Sambor project, coupled with another proposed dam on the Mekong in Stung Treng, could create an “extreme crisis” for the populations of affected provinces, the report said.
Due to the likely impacts, it recommended a 10-year delay to dam constructions on the river.
Chith Sam Ath, executive director of the NGO Forum on Cambodia, said he was concerned by the news of the four new dam studies, adding that such research was only valuable if conducted independently.
“The evaluators of the environmental impact assessments should be experts from an independent organisation,” he said. “The government should clearly monitor the documents of the feasibility studies before giving permission for the construction of the dams.”
Suy Sem said the Chinese feasibility studies would determine the impact of the dams and play a role in whether they go ahead. “If we figure out that there are serious impacts, then we will not allow the constructions,” he said.
Suy Sem said five hydroelectricity dams are currently under construction in Cambodia, all by Chinese state power companies. Huadian Corp has already been contracted to construct the US$412 million Stung Russey Chrum Krom dam in Koh Kong province.
Posted by CAAI News Media at 7:18 am