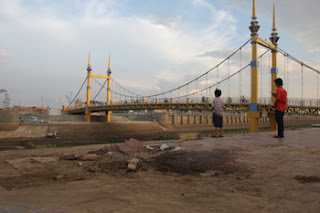 Photo by: Heng Chivoan
People stand at sunset yesterday near the northern bridge to Diamond Island, where a stampede last month killed 353 people.
via CAAI
Thursday, 16 December 2010 20:32 Tep Nimol
REPRESENTATIVES of a development company said yesterday that the firm plans to build two new concrete bridges close to the Diamond Island suspension bridge, where more than 350 people were killed last month in a stampede on the final night of the annual Water Festival holiday.
An official government investigation determined that the swaying of the suspension bridge caused panic and led to the stampede, which left 353 people dead and another 393 injured.
Touch Samnang, Koh Pich project manager for the Overseas Cambodian Investment Cooperation, said yesterday that the new bridges would be more stable.
“The two bridges are concrete,” he said. “They are different from Koh Pich Bridge.”
He declined to give a timeline for the project, which he said would cost an estimated US$3 million.
During a meeting at City Hall on Monday, Governor Kep Chuktema gave permission for the construction of the bridges to begin in mid-January.
At the meeting, Sum Piseth, vice director of the municipal Management Office, said the two bridges would each be 101 metres in length and 12 metres wide, and would have emergency stairs and “no shaking”.
“Those bridges will take, at the longest, 10 months to complete,” he said.
Posted by CAAI News Media at 10:23 pm