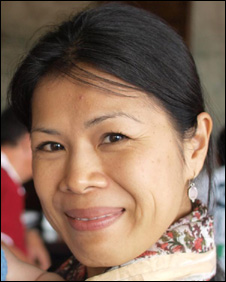 LONG BEACH - Theary Seng survived the Killing Fields of Cambodia and emigrated to the United States, where she was in the Long Beach area while attending Valley Christian High School.
She has since earned international acclaim for her autobiography, "Daughter of the Killing Fields" and her advocacy work for human rights as founder of the Cambodian Center for Justice and Reconciliation in Phnom Penh.
When not working on her many issues, she speaks at conferences all over the world telling her story and touching on issues of justice and reconciliation, democracy, faith and human rights.
Long Beach and surrounding area residents will have the opportunity to listen in on Seng and other speakers who are part of the award-winning January Series, presented by Calvin College and simulcast locally.
A Christian school in Michigan, Calvin College has earned critical acclaim for its annual series of speakers. Since 2008, the presentations have been simulcast and are now heard in 30 locations in the U.S. and abroad.
The Bethany Christian Reformed Church in Bellflower is one of the participants and the only one in the Southland.
This year, the 24th of the series, will feature a diverse group of speakers talking about a variety of faith, ethical and social issues.
"I think (the January Series) gives exposure for some of the most prominent thinkers in many fields," said Stan Cole of Bethany Church.
The speakers include Hall of Fame baseball player Cal Ripken Jr., the Rev. Greg Boyle, founder of Homeboy Industries in Los Angeles, and Seng, who speaks Jan. 7. A total of 15 presentations will be delivered during the three-week stretch.
The January Series has received recognition for its quality and diversity of perspectives on issues of national and global importance.
The series began simulcasting to other locations in 2008 and is now shown in Canada and Europe.
Cole said the series explores often controversial issues as one of the school's goals "to challenge some long-held truisms."
greg.mellen@presstelegram.com, 562-499-1291
Posted by CAAI News Media at 11:21 pm