Sweet deal for the Kingdom 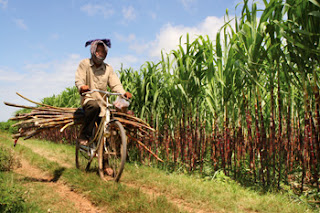 Photo by: Heng Chivoan
A man rides a bicycle past a sugarcane field. Cambodia is set to add three more sugar plantations next year, according to officials.
via CAAI
Tuesday, 07 December 2010 20:36 Chun Sophal
Three companies plan to begin producing sugar cane on 50,000 hectares next year, which government officials say will help the Kingdom replace imports of the staple sweetener.
Minister of Agriculture, Forestry and Fisheries Chan Sarun told The Post that the firms – from Thailand, India, and Cambodia – planned to establish plantations and processing factories in Kampong Speu, Kratie, and Oddar Meancheay provinces.
“We hope that with the farming and processing operations, Cambodia will be able to produce [enough] sugar to meet domestic demand so we can stop importing sugar.”
The Kampong Speu project was owned by a Cambodian investor, he said, though he declined to release the companies’ names or the size of the investment.
However, Ministry of Agriculture, Forestry, and Fisheries Chief of Cabinet Hong Narit told The Post last month that Indian company Kamadeno Venture Cambodia had been granted a concession to grow sugarcane and set up a processing plant on nearly 8,000 hectares in Kratie province’s Sambour district.
Mong Reththy, chairman of Mong Reththy Group and president of the government private-sector working group on agriculture and agro-industry, said Cambodia had sugarcane producing potential.
However, he said the industry was not an easy one because it required drive from investors, as the industry faced human resources challenges and required large amounts of capital.
To grow sugarcane on 10,000 hectares of land and set up a processing plant would require at least US$100 million of capital, he said.
“We support idea of expanding sugar processing industry in Cambodia because it is not only a great project to meet domestic demand, but also a good opportunity for export,” Mong Reththy said.
Cambodia largely uses sugar imported from neighboring countries such as Thailand and Vietnam as it has only one sugarcane processing plant, located in Koh Kong province.
The Koh Kong plant would be able to produce about 24,000 tonnes of sugar per year, Prime Minister Hun Sen said at its launch in January.
He said that was less domestic production than demand warranted, so that Cambodia needed to motivate farmers to grow more sugarcane in the future.
Hun Sen cited a study from 2000 that found every Cambodian needed 7.3 kilograms of sugar per year.
Posted by CAAI News Media at 11:15 pm