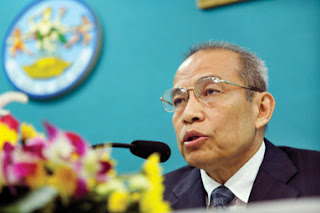 Photo by: Heng Chivoan
Im Suosdey, president of the NEC, speaks to reporters yesterday about the distribution of the NEC’s updated voter list.
via CAAI
Thursday, 06 January 2011 15:01 Meas Sokchea
THE opposition Sam Rainsy Party has requested that the National Election Committee and Ministry of Interior extend the time in which people are able to register to vote, a period that currently lasts for just 20 days per year.
Speaking during a press conference yesterday, SRP lawmaker Ho Vann said the narrow window unnecessarily limited the number of registered voters, and called for the NEC to allow people to register within a six-month annual window.
“I want people to register all together and vote all together,” Ho Vann said, adding that this often did not happen and that there were “a lot of people” who remained unregistered.
“The time for registration is very short. We would like to have registration longer than this, at least six months,” he said.
The short window for registration was especially likely to hinder people living in poverty and those without a fixed address, who may not have easy access to identity cards and other documents required for registration, Ho Vann added.
NEC president Im Suosdey, who presided over the press conference yesterday, said extending the registration process would contravene Cambodia’s Election Law.
He said the NEC, too, would like to achieve comprehensive registration and voting rates, but noted that even if the time frame was extended it was impossible to ensure that everyone participated.
“There is no country that can [ensure] registration all together,” he said. “[If someone] has documents and he does not come to register, it is his right and we cannot force him.”
Koul Panha, executive director of election monitor Comfrel, called for a compromise, suggesting that the registration process be extended to four months.
“It is not enough of an improvement, but at least it can make it easier for people,” he said.
A total of 8,543,283 people were registered to vote last year, up from 8,331,906 in 2009, according to NEC figures released yesterday.
NEC Secretary General Tep Nytha said that 0.58 percent of the eligible voting population was unregistered in 2010, down from 0.82 percent.
Posted by CAAI News Media at 11:22 pm