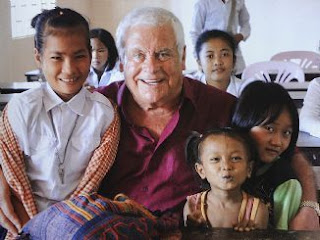 Neighbours actor Tom Oliver is the ambassador for Connecting Hands, a charity that helps Cambodian survivors of the child sex trade. CARMELO BAZZANO N31WH203
A CAMBODIAN girl is sold into sexual slavery at the hands of those she trusts.
A man who poses as her grandfather sells her into a life of torture and daily rape.
She is 12 and years later she is brave enough to escape her life after witnessing the murder of her best friend.
She vows to never forget those she left behind.
Somaly Mam is no longer a voiceless victim and has since dedicated her life to saving victims of the sex trade and empowering survivors.
She created a non-governmental organisation called AFESIP (Acting For Women In Distressing Situations), which rehabilitates children and young women who have been rescued from the sex trade.
Connecting Hands is the sister charity of AFESIP. Formed last September, it has Neighbours actor Tom Oliver as ambassador.
“In Cambodia there is so much corruption,” Oliver said.
“We need to open people’s eyes to what’s happening on our doorstop.
“These women have spent the formative years of their lives doing what they have to do just to survive.”
Oliver has visited the rehabilitation centres, which left him with a sense that inroads were being made to stamp out the horrendous crime.
AFESIP has three centres in Phnom Penh, Kompong Cham and Siem Reap.
“They can now raid the brothels and the women are given legal rights, but some of the girls don’t even know where they came from,” Oliver said.
About four million young women and children will be sold into the sex trade within the next 12 months.
It is a $9.5 billion trade that is second only to drug trafficking as the largest organised crime in the world.
Many of these children are sold for as little as $10 and some are as young as five.
A fundraising dinner for Connecting Hands will be held at the Clarion Hotel in Forest Hill on February 26.
Somaly Mam will be the guest speaker.
Tickets are $80. RSVP by February 3.
Phone 0433 705 897 or visit connectinghands.com.au for more information.
Posted by CAAI News Media at 12:01 pm

A Reliable and best Online Eastham taxi Taxi service with great price promise. We are ready and prompt any time with your convenience. With clean cars and best drivers with years of experience and commitments, you can rely on us for the best and comfortable journey.