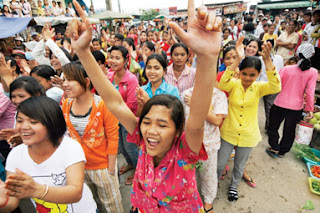 Photo by: Heng Chivoan
Garment workers protest during a strike in September.
via CAAI
Monday, 10 January 2011 15:01 Mom Kunthear
NEARLY 400 workers fired or suspended in the aftermath of September’s garment strikes remain out of work, and union representatives say a request for government intervention has so far gone unanswered.
On December 31, the Coalition of Cambodian Apparel Workers Democratic Union and the Cambodian National Labour Federation sent a letter to the Ministry of Labour asking that officials urge the owners of 18 factories to drop complaints against 379 garment workers and allow them to return to work.
The unions also requested that the Ministry push ahead with negotiations over worker benefits through the Labour Advisory Committee.
But Um Visal, a labour dispute resolution officer at CCAWDU, said yesterday the ministry had not responded.
Huon Soeur, deputy director of the ministry’s Department of Labour Disputes, said yesterday he had not yet seen an order from Minister Vong Soth to address the complaint.
However, CCAWDU president Ath Thorn said employers had responded, requesting that unions sign a contract prior to any negotiations, which would force them to abide by the LAC’s decision.
But Ath Thorn said it was not in the interests of the unions to make a binding agreement to the outcome of negotiations before they were completed.
When the benefits negotiations were announced at the end of November, Ken Loo, secretary general of the Garment Manufacturers Association in Cambodia, told The Post that GMAC wanted a signed agreement from unions that they would not strike against an agreement made through the LAC.
Som Aun, president of the National Union Alliance Chamber of Cambodia, said LAC hopes to complete negotiations on the issue this month and implement any agreements reached in February.
Posted by CAAI News Media at 11:34 pm