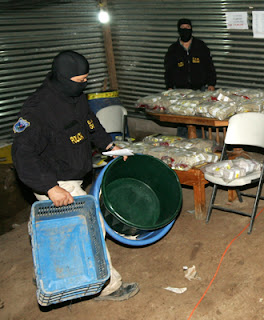 Officer open a bareel containing millions of dollars worth of U.S. currency that was found buried in rural area
via CAAI
Mar 15, 2011
PHNOM PENH - A CAMBODIAN court on Tuesday charged five Vietnamese and one Laos national with drug trafficking after police seized more than 11kg of methamphetamine from Laos in a major raid.
The six were arrested after police confiscated nearly 88,000 methamphetamine tablets, weighing 8.8kg, and three kilograms of methamphetamine powder during a raid at a Phnom Penh residence on Friday, said national police spokesman Kirt Chantharith.
'The drugs were supplied from Laos... and could have been destined for Vietnam and Thailand,' he said.
If convicted, the six men and women face 'a minimum of 20 years in prison", Hing Bunchea, a prosecutor at Phnom Penh Municipal Court, told AFP.
Local media estimated the drugs have a street value of more than half a million dollars.
Cambodia has ramped up its war on drugs in recent months, resulting in hundreds of arrests. -- AFP
Posted by CAAI News Media at 11:45 pm