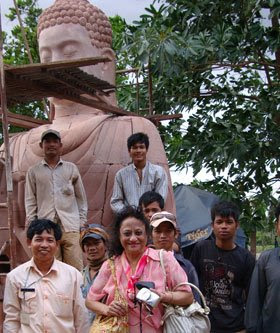 PETER OLSZEWSKI Sulata Sarkar poses with workers in front of her Buddha statue.

SAN Francisco-based Indian philanthropist Sulata Sarkar has almost completed a two-and-a-half year "labour of love" that she is bequeathing to the people of Siem Reap.

She has commissioned the carving of a huge sandstone Buddha statue to sit on top of a lotus stand, which in turn will be placed on a large pedestal.

The statue is over seven metres tall and weighs an estimated 70-80 tonnes. It was originally commissioned in May 2006 and is to be installed on a site outside Siem Reap's new Preah Norodom Sihanouk Angkor Museum in December.

Calcutta-born Sulata Sarkar has paid for this through her US-based Cinema Art Yoga Foundation, which has also built a US$2 million Asian art museum in California.

She told the Post that she wanted to bequeath something to the people of Siem Reap, and when she surveyed local citizens as to what they would most like, the Buddha statue was the most popular request.

She then commissioned a former soldier-turned-stone-carver, 76-year-old Him Tour, to make the statue.

She said, "He is an amazing man for his age, and he spent so much time sitting on top of that statue working in the hot sun. It took strong will power to continue the task."

Sulata Sarkar said Azedine Beschaouch, adviser to the assistant director general for culture in UNESCO for the International Safeguarding Program of the Angkor temple complex, together with Indian Ambassador to Cambodia Aloke Sen, helped her find a permanent site for the statue.

She said, "I was first offered a site at the Angkor Wat complex, but this was not suitable because they shut the area at 6pm and I want this statue given to the public so they can enjoy it anytime they want.

"Then Neon, the Japanese company involved with building the museum gave me some land outside the museum, and that is where the statue will go."

Top US engineering firm Bechtel contributed expertise to help design the pedestal the statue will stand on and to find a contractor to move the statue to the permanent site.

The statue will be disassembled into hundreds of pieces and then reassembled, a process that will take about 45 days.
Posted by CAAI News Media at 8:30 am