Prime minster's daughter lashes out at journalist over tryst claims 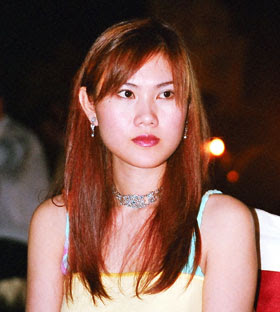 HENG CHIVOAN; Hun Mana, director of Bayon TV and Radio and daughter of the PM seen in a file photo.
The Phnom Penh Post

HUN Mana, the daughter of Prime Minster Hun Sen and the director general of Bayon Radio and Television, lashed out at a journalist with Beauty magazine in a letter submitted to Minister of Information Khieu Kanharith, accusing the writer of defamation and asking the minister to take action.

The letter, dated last Thursday, accused San Bunthoeurn of defamation stemming from a story he published in the August 15-31 issue of his publication. In the story, he described an alleged love triangle between Bayon programme manager Tit Thavarith, actress Sim Solika and a second man, Por Sam Oeun.

The letter did not detail the substance of the defamation but said the claims made were untrue and were intended merely to damage the honour and popularity of Bayon. It added that San Bunthoeurn had tried to extort money from actors and high-level staff at the station and had previously tried to get a job there.

San Bunthoeurn had been given permission to interview Bayon staff members but he misled them about the subject of the story he was writing and later demanded US$3,000 from Tit Thavarith to stop the article from running, the letter claimed.

Hun Mana could not be reached for comment on Tuesday. Bayon's deputy director general, Rith Chetra, told the Post he knew nothing about the matter and that it has nothing to do with him or with the station.

San Bunthoeurn defended his story against criticisms raised in the letter. "I based it on anonymously sourced comments of staff and actors," he said. He added that he had not asked for money, but said Tit Thavarith tried to stop publication of the story. Khieu Kanharith said he would not pursue legal action against the magazine as it was a private matter.
Posted by CAAI News Media at 10:28 am