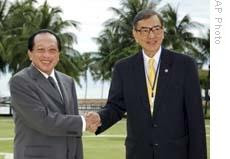 Extensive bilateral talks between the Thai and Cambodian foreign ministers failed to produce a full solution to the Preah Vihear crisis, with both sides welcoming the recent "reduction of tensions" but neither declaring a full withdrawal of troops from the area.

Representatives from both countries will meet again at the end of August to discuss a second phase of redeployment, following the partial reduction of troops in a pagoda and areas surround Preah Vihear temple this weekend, according to a joint statement released following Monday's meeting.

The two sides also hoped to have a meeting between committees again in October to discuss broader border issues, which stem from longstanding conflicts of the early 1900s.

Cambodian and Thailand have had hundreds of troops on the border at Preah Vihear since the occupation of Thai soldiers of the Keo Sikha Kirii Svara pagoda, which is claimed by both sides, on July 15.

The issue was further complicated by the fortification of a second set of temples, the Ta Moan complex in Oddar Meanchey province, in early August, by Thai soldiers.

Both sides agreed Monday to discuss the issue of the Ta Moan temples in a later meeting between foreign ministers.
Posted by CAAI News Media at 8:18 am