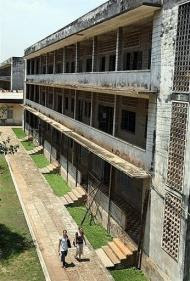 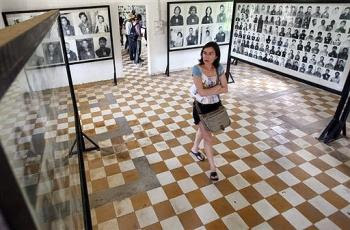 PHNOM PENH (AFP) — Cambodia's government is seeking to register a notorious Khmer Rouge prison and its archives at the UN's cultural agency, according to documents obtained by AFP Tuesday.

The archive contains over 5,000 photographs of the more than 15,000 prisoners, as well as biographical records of Khmer Rouge officials and inmates, torture instruments and written confessions, said a copy of the application to UNESCO's Memory of the World programme.

"Undoubtedly crucial as evidence to be use in the forthcoming Khmer Rouge trial, the archive is also an essential part of Cambodia's recent history," it said.

"Its significance as a part of the Memory of the World stems from its testament to man's inhumanity to man and its documentation of one of the most extreme examples of crimes against humanity in the 20th century with a major impact on world history," it added.

The high school turned torture centre is still littered with reminders of its brutal past, such as shackles and bare metal bed frames on which the corpses of inmates were found by invading Vietnamese soldiers in 1979.

The Tuol Sleng Genocide Museum Archive was registered by UNESCO's Memory of the World for Asia and the Pacific region last February in a step towards international recognition.

The prison was run by Kaing Guek Eav -- better known as Duch -- who is among five Khmer Rouge leaders detained by the UN-backed court for crimes committed during the regime's 1975-79 rule.

Duch's trial for crimes against humanity is expected to begin in October.

Up to two million people were executed or died of starvation or overwork as the communist Khmer Rouge dismantled modern Cambodian society in a bid to forge an agrarian utopia.
Posted by CAAI News Media at 11:02 am