Of commerce in Cambodia 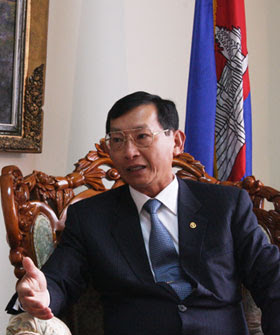 HENG CHIVOAN; Minister of Commerce Cham Prasidh in his office in Phnom Penh.

During your years as a minister, has the press treated you fairly?
There are people who think that freedom of the press means they can say what they like, and sometimes they go too far and fabricate stories to harm your credibility. It happens whenever there is an election, the opposition and their newspapers attack us, saying we are corrupt and not doing our job properly. This is the way they operate.

Despite that, you won the election pretty handsomely.
Yes, the result was good for us. We knew we were going to win because we have done so much for the people. But the result went beyond our expectations, and we won more seats than we had anticipated. What is important is that we were able to ensure that it was a safe election. Nobody was harassed, and no one was prevented from voting. Of course, the opposition complain and moan about such things, but later on they will accept the result. They should try to play a proper check-and-balance role, because they have no other choice. What else can they do - just go to sleep and wait until the next five years pass and there's another election?

If you expected to win, why did you need to poach politicians from the opposition?
The people who joined us had seen that the government has done good deeds. They wanted to join us because we have been a success story. Why would they want to continue to be part of a bad story? They want to get on the boat. That is safe.

You criticise the media and the opposition, but don't some rich and powerful figures who feel their money and political connections give them impunity also behave badly?
What do you want us to do - take action against people just because they are rich? Or should we continue to help the country prosper, because it's better to have rich and poor, than only to have poor. When people get richer and richer by speculating, buying and selling land and so on, what can you do? People who have never had money, never been rich, suddenly become millionaires, even billionaires. They are like mushrooms that pop up overnight. And if you turn a simple man in the street into a minister, a general, a business tycoon, it's like a tiger changing its stripes. They change their behaviour, and that's why they sometimes they behave in that way.

Doesn't their bad behaviour highlight the economic disparity between the rich urban elite and the rural poor?
You know, when you develop a market economy, certain sectors move faster and you can make profits faster. Others move slowly, so you also make money, but at a different pace. Normally, the speed in the countryside is slower than in the urban areas. So businessmen with factories in the city, and now people who engage in land speculation, they make money faster. So, there is inequality. But it is the same everywhere, not just in Cambodia. In the US and Europe, they still have beggars on the streets. So can we say they have perfect systems? Whatever you do, you cannot reduce poverty at the same speed everywhere. You have to do it step by step by creating jobs and attracting investors.

What do you tell investors who complain that contracts are not respected in Cambodia?
We don't have all the laws yet to properly govern doing business here. But we are going to set up an arbitration centre and also a commercial court that will address these issues. They are needed because sometimes people feel there can be problems in the civil courts. We know that many people continue to distrust our judicial system, and that's why many reforms have been made. That process will continue, and we hope that in a couple of years, things will be better. It is just a question of time. And since we joined the WTO, a lot of investors have come here because they feel more secure and confident knowing they will now be protected by international rules and regulations.

Are you ready to set up a stock market next year?
Personally, I think it is premature. But we cannot wait too long. When it comes in next year, it will be for a trial period for at least three years to make sure that everything goes properly. In the meantime, we have to adopt the e-commerce law so that people can refer to it for e-commerce transactions and so on. Until we have that law in place, the stock market cannot commence.

You've known Hun Sen for 25 years and even play golf with him. What's he like?
He is very dedicated and very devoted to his people. He always travels to the countryside to keep in touch with them, and he listens to their problems and tries to help them. This makes people believe in him and continue to support him. They know that he is the one who has been able to pacify the country.

Only since we dismantled the Khmer Rouge regime have we had peace and unity in Cambodia. For the first time in our history, there are no pockets of rebellion or separatism, and the central government rules over the whole country. That generates a lot of confidence, and that's why more people are coming here and investing more. Our own farmers are starting to grow more, and the livelihood of everyone is improving.

Let me also tell you that the prime minister is very open. He listens and absorbs the ideas of the entourage around him, and then he makes them his own. That is why, despite his limited background - he only has a secondary school education - he has been able to grow and rule the country for more than 25 years. Some people say the longer you stay in power, the more your power erodes. But as long as you know the needs of the people, and you address their needs, that power is not going to erode. It will be consolidated. That's why the CPP continues to be in power. Wait until after the next five years, we will get even more votes at the next election because we are going to build more roads, more schools, more bridges, more hospitals.

You still seem enthusiastic after all these years.
Why should I not be enthusiastic and satisfied when I see my policies being implemented and helping the country move to double-digit growth? In my ministry, we are like the lubricant of the economy. If we are not working well, the government will not work well. But we cannot be complacent and rest on our laurels. This year will not be as rosy as we expected because of the high price of oil. But if it drops a little bit more and the dollar gets a bit stronger, we will be safe. Perhaps we can move again to double-digit growth this year.

Why do you keep all your past copies of The Phnom Penh Post?
I have a small library so I like to get the consolidated edition, so I can keep things in order. That way, when I get old and I want to go back and see what we have done, I will be able to do it conveniently because The Phnom Penh Post provides a good documentary record. And as well as providing a good memory, it is also a learning experience. We evolve by learning from the past, by making sure we do not repeat previous mistakes. That is important. That's why we always do a good job.

How are you going to diversify the economic base?
We have a very narrowly-based economy that is dependent on tourism and textiles, and both these sectors are vulnerable because they are subject to external shocks. If anything negative happens, the garment makers will pack up their sewing machines and the tourists will stop coming to Cambodia. So, for many years now, we have been preparing to diversify our economy into other sectors that have more long-term stability, like electronics and manufacturing goods. And we are promoting new resorts along the coast that will provide other attractions aside from Angkor Wat and other temples.

Can Cambodia maintain these high growth rates?
Yes, provided the price of oil does not go too high, we will continue to have double-digit growth. The cost of energy is the key factor. It is already high here because, although we have many rivers, we do not have many hydropower dams. We cannot do anything on the Mekong River because it would affect all the ecosystem there. So we have to go to the tributaries and to areas in the southwest and northeast, where we can start to develop hydropower plants. In the meantime, we are arranging for Vietnam, Laos and Thailand to supply us with cheaper electricity.

There is relatively little investment here from the US, why is that?
Although we have a good record of attracting investors to Cambodia, we cannot expect to perform better than Thailand and Vietnam, because they are much bigger countries with bigger domestic markets. Still, we have been able to bring more investment into Cambodia than we expected.As for the US, they had imposed restrictions on dealing with us because they said Cambodia had a Communist regime. That is no longer true, but the ban was only lifted last year. So it is only since then that American businessmen have started to explore the Cambodian market. But already a lot of American companies have started to set up representative offices here because they see Cambodia has great potential for their future business strategy in Asean.

How do you respond to charges of nepotism because your wife and daughter and son work in your ministry?
[My wife] has now retired, so please don't talk any more about her working here because she does not. My son and my daughter do work here. But they are graduates from abroad, and they are qualified. So what should I do? Leave them to their own fate or recruit them, as I recruit hundreds of other young people?
Posted by CAAI News Media at 11:22 pm