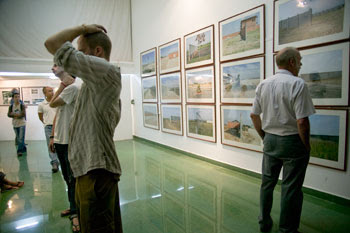 Vandy Rattana; Photographs document the destruction of Cambodian architectural heritage and the construction of an uglier future at the In Transit exhibition, currently showing at the Meta House.

IN Transit, an exhibition that presents an insight into how Khmer and ex-pat architects and designers view, and identify with, the urban heritage of 1960s "New Khmer Architecture", opened at Meta House on Tuesday.

Looking at contemporary architecture in Cambodia in light of the fast-paced development boom, the exhibition showcases how the changing landscape of Phnom Penh can affect people and even alter national identity.

The exhibition features works by Helen Grant Ross, John Vink, PHARE and architecture students. With traditional buildings being bulldozed to make way for "modern" skyscrapers, there has never been a more timely moment to ask what artists think about the changes taking place around them.

Information panels based on the work of Helen Grant Ross, the co-author of Building Cambodia: New Khmer Architecture, educate viewers of the exhibition about architectural icons of Phnom Penh, outlining their history as well as past and present function.

"Whether private houses or official prestigious buildings, architecture can be seen as an art form deeply connected to human life," one reads."

The panels introduce style and function of New Khmer Architecture and show its sustainable character. The buildings and the master plan are examples of this architectural movement in the '60s and embody the unique synthesis of post-war European modernism and Angkorian vernacular," reads a description of the exhibit on the Architecture Cambodia website.One of the more interesting panels is on Phnom Penh's Bassac area, designed by Lu Ban Hap and Vann Molyvann in the 1960s.

"Architecture can be seen as an art form deeply connected to human life. "

An "ambitious scheme for ‘New Phnom Penh' aimed to develop the reclaimed land from the banks of the Bassac River with low-cost apartment buildings, the 468 apartment buildings built by the municipality in 1963 are presently occupied by squatters, who are facing an uncertain future." 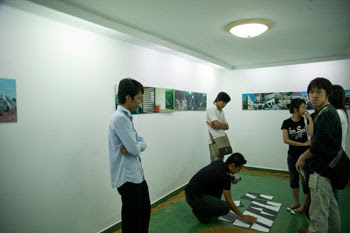 Vandy Rattana; Architectural students prepare an installation at the In Transit exhibition, which opened Tuesday night in Phnom Penh. The show looks to the future while taking stock of what has been lost.

John Vink, a Belgian photojournalist based in Phnom Penh, uses the exhibition as a platform to showcase his photographs on the absence of architecture in urban and sub-urban spaces in transition. His photography depicts huge vacant lots in and around Phnom Penh waiting to be developed.

"[The photos] are documenting unsophisticated expressions of power, shallow dreams, where the only trace of creativity is the creation of material wealth. It is the expression of a market-based economy at its best/worst where individual well-being supersedes common interest," Vink said.

Vink is sceptical about the real estate boom in Phnom Penh as well as the architectural future of the city."The blatant lack of consideration for even basic urbanistic concepts regarding mobility, social diversity [and the] environment are quite appalling," he said.

The architectural future of Phnom Penh will be boring if "the investors don't stop mirroring their ego in the number of floors they are building," he added.

Striking photo strips of three Phnom Penh buildings from the 1950s and 1960s demolished in 2007 taken by Stephanie Irmer showcase the life and tragic death of the buildings.

Photos taken before and during the demolition of National Bassac Theatre, the Council of Ministers and Ecole Polytechnique illustrate the danger of a silent destruction without opposition that Phnom Penh's urban heritage is facing.

The In Transit exhibition is also a platform for young architects and their ecological projects, including renovation of the Hotel Frangipani and a 1960s villa by Chea Chantheborras.