Pchum Ben: the poor are getting richer 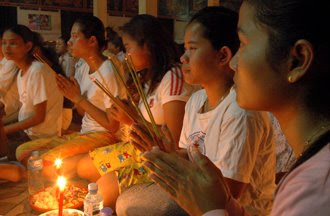 Is the festival of the death a lucrative business? This is certainly the hope of the poor who are begging in large numbers throughout the pagodas during this period.

While the ancestors, called “Brêts”, are authorised to return to Earth amongst the living, thanks to “Yama”, God of Death, the destitute people try to benefit from the believers’ generosity by visiting the pagodas in search of a few cents. Chouly, 63 years old and from Prey Veng province, settled in front of Wat Toul Tum Poung in Phnom Penh on the first day of Kan Ben, the ceremony preceding Pchum Ben.

“The faithful give me about 5000 riel per day, she explains, which allows me to feed my children.” A little further, Sina, 32 years old, says that the older ladies are the most generous ones. “They feel sorry for us, she says. And it’s true that for Buddhists, offering some money ensures a better situation in next life.” Some destitute people came with their children. They’re often the ones who look after the shoes of the believers at the entrance of the temples, which allows them to earn at least one hundred riel per pair. According to Kour Sopheap, deputy chief of the Koul Totoeung pagoda in Kandal province, beggars are considered as living “Brêts”. “During the festival of the death, says the monk, believers are more generous than usual.”

But it’s not all. In front of the pagodas, the poor sell incense, candles, cakes and also birds: all kinds of offerings used for ceremonies. “I’m poor, continues Sina. But I feel ashamed to beg, so I’m trying to do something else. This year I’m a money changer. For eight new notes of 100 riel, I can receive 1000 riel. It’s a business like any other, and it’s going well because the believers prefer to offer new notes to the pagoda. They believe that this will give them better karma.”

However, each year during Pchum Ben, the destitute come in larger numbers to the pagodas. An NGO member who wants to remain anonymous deplores that. According to him it’s a sign that Cambodia still is a poor country.
Posted by CAAI News Media at 8:54 pm