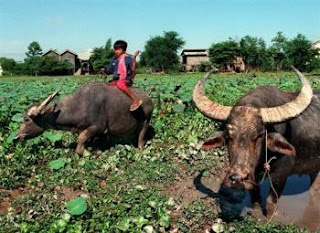 VIHEAR SUOR, Cambodia (AFP) — Thousands of Cambodians converged on a village northeast of the capital Monday for annual water buffalo races which bring the country's festival for the dead to a close.

The races mark the last day of Pchum Ben, a three-day festival in which Cambodians believe their dead ancestors emerge to walk the earth. Prayers at Buddhist pagodas and offerings are made to ease the suffering of the spirits.

"I've been joining this race since I was 15 years old. I enjoy the thrill of riding the buffalo in front of so many people like this," said Chorn Khein, a 30-year-old farmer.

The 35 contestants took part to commemorate the Neakta Preah Srok pagoda spirit, said San Sem, 55, a farmer and one of three race judges.

"We want Neakta to look after our village and take care of our cattle so they don't get ill," San Sem said.

"Another reason for the celebration is that the villagers want to show off their own buffaloes," he said.

Vihear Sour village about 50 kilometers (30 miles) northeast of Phnom Penh began holding the race more than 70 years ago. It is followed by a traditional wrestling match.
Posted by CAAI News Media at 6:49 pm