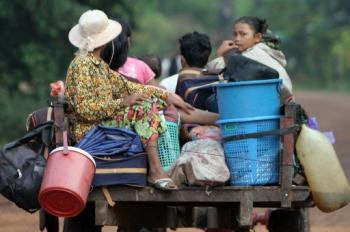 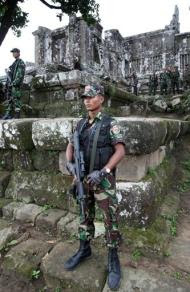 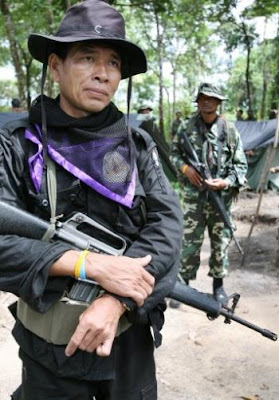 KANTHARALAK, Thailand (AFP) — Up until late June, thousands of tourists each month would flock to the 11th century Preah Vihear temple to admire its elegant carvings and crumbling stone staircases.

But now, the stunning UN World Heritage Site perched just over the Thai border high on a Cambodian mountaintop is teeming with troops, not tourists, after a decades-long dispute over surrounding land erupted into violence.

The Thai entrance to the temple has been closed since June 22 when border tensions between Thailand and Cambodia unravelled, leaving many Thais along the border who relied on the steady stream of sightseers in dire straits.

"My income has dropped more than 50 percent from when I was selling at the temple," said 50-year-old clothes seller Malai Konghom, who has had to move her business 13 kilometres (eight miles) away from the border.

"I am lucky that all my kids have already graduated but I still feel the effects... I sit here on a quiet day, hoping to sell something to tourists visiting the waterfalls."

Hotel manager Porntip Nimlamai, 47, said she had to sack a maid and reduce her expenses, as only four of the 14 rooms at her property in Kantharalak town near the border are filled.

"It is quite serious, I stopped doing my accounts in August because it is always in the red," she told AFP, adding that she had resorted to switching off lights and removing refrigerators from empty guestrooms to reduce bills.

Although the World Court ruled in 1962 that it belonged to Cambodia, the most accessible entrance is in Thailand's northeastern Si Sa Ket province.

Any tourists wanting to visit from Cambodia would have to scramble up a thickly forested mountain or charter a helicopter.

Thailand and Cambodia agreed in August to reduce troop numbers at the site, but the remaining soldiers engaged in a gunfight Wednesday that left two Cambodian soldiers dead and several from both sides injured.

Since the shoot-out, both sides have agreed to a joint border patrol aimed at preventing more violence, but with no timetable planned the villagers have no idea when the border will reopen and healthy trade will return.

Like other countries, Thailand is also suffering from the global financial crisis, and tourists are also wary of domestic political tensions which erupted into deadly clashes between police and anti-government protesters on October 7 in Bangkok.

Sriphuwong Chantachompoo, a Si Sa Ket tourism official, said that until the military face-off at the border, the number of tourists visiting Preah Vihear from Thailand had been increasing.

Figures from the Thai national park where tourists cross over to Preah Vihear show that during the 2006/2007 fiscal year, 142,679 tourists visited the park, up from 125,353 a year earlier.

Sriphuwong said the whole province only sees about 80 tourists a month now, who come to visit the area's other temples and waterfalls.

"It has had a huge effect -- the number of tourists has dropped sharply," he said.

"It is difficult to hold events to draw tourists (without the temple). It's not like the south, which has beaches, or the north, which has beautiful views of the mountains. The northeast does not have scenery like that," he added.

And foreign embassies in Bangkok are now advising their citizens to stay well away from the entire area, as tensions remain and troops stay put.

"Previously, we used to advise people to avoid the temple, now we're telling them to avoid the whole border area," a British embassy spokeswoman in Bangkok told AFP.
Posted by CAAI News Media at 7:18 pm