The standoff at the temple 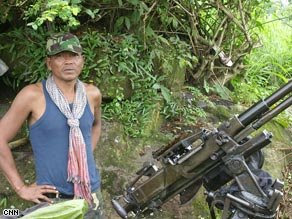 A Cambodian machinegunner stationed in the disputed border zone.
In the field
October 18, 2008

PREAH VIHEAR, Cambodia – The way a country deals with the press says a great deal about the way it deals with its own people. I found a stark contrast between the attitudes of Cambodia and Thailand this week, while trying to cover the brief skirmish between the countries’ two armies on a disputed patch of ground near a wonderfully remote and romantic ancient temple.

Preah Vihear is suffused with mystery and majesty in equal measure. Its vertiginous position and splendid isolation are beguiling. The problem is it also happens to be right on the Thai-Cambodia border. But it’s not the collection of finely carved, quietly crumbling stones that is the subject of the wrangle; instead it’s the strategically important, but far less impressive, patch of scrub next door.

I won’t go into the history of this now, as practically every supposed fact is disputed — suffice to say it involves more than a century of claim and counter-claim.

Anyway, what was interesting was the way the Thai army had totally sealed off the border from their side, denying the press access. Checkpoints several kilometers away stopped reporters getting anywhere near to the site of the violence. Watch report on disputed Thai-Cambodia border

But luckily my crew and I had decided to take a chance on the Cambodian side. It involved flying to Siem Reap , driving right past Angkor Wat (for those who’ve never heard of it, think the movie “Lara Croft: Tomb Raider”) and then basically going another six hours along mostly dirt roads until we reached the bottom of the cliff, where we changed our van for a powerful SUV, for the white-knuckle scramble to the top.

The Cambodian army couldn’t have been more helpful. A taciturn general, sitting like a Khmer king in a tent in the middle of the jungle, solemnly pointed at the border as they saw it. He told us his troops didn’t want a confrontation with the Thais, but claimed the Thai soldiers had fired first and had repeatedly crossed into their territory.

Around his camp, field guns and mortars had been set-up. Many of his troops wore the traditional red Khmer scarf, as favored by the ultra-communist Khmer Rouge troops who’d used the Preah Vihear temple as their last bastion until 1998.

They gave us a guided tour of their positions. We talked to a machine gunner, dressed in a grubby vest, who insisted the Thais fired first and pointed to the pile of spent cartridges lying in the grass under his weapon. They’d been a fierce firefight for an hour and he claimed the Thais had fired rocket-propelled grenades at their positions, just yards from the temple itself.

We managed to talk to one Thai soldier who was reluctant to answer the question of who started the attack, but he again reiterated they didn’t want to fight the Cambodian soldiers who they’d been living next to in a jungle camp for weeks.

Neither side is willing to pull back and yet both sides claim they don’t want any further escalation. The Thai military seem very keen to keep the press away; the Cambodians seem keen to show reporters around.

Perhaps that’s not significant and just a result of different media strategies. But I got the impression there was something else. It was as if the Cambodians felt they had nothing to hide, and the Thais were guiltily excluding the press in case too many awkward questions were asked.

Now before all our Thai readers go into spasms of anger, I am not making a judgment as to who fired first: this is merely an observation of how it felt on the ground. I’m sure there is a perfectly innocent explanation to the whole clash. My cameraman thinks that some soldier tripped on his flip-flop and accidentally fired his RPG. You know, it’s such a ridiculous situation that actually wouldn’t surprise me.

Both countries need to grow up, start acting responsibly and start thinking about their people, many of whom live in abject poverty, rather than resorting to the kind of petulant show-boating politics and chest-puffing nationalism which both sides should be ashamed of.