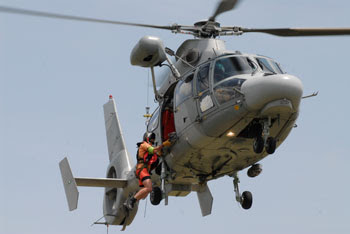 TRACEY SHELTON; A French soldier demonstrates how to use a helicopter as part of a maritime rescue mission on Saturday.
The Phnom Penh Post

A French warship docked off the coast of Sihanoukville gives a demonstration of a helicopter rescue, but a French officer denies the trip is linked to any donation of equipment

THE French warship Novose docked off the coast of Sihanoukvile this weekend in a visit highlighted by an ocean rescue mission demonstration for the Royal Cambodian Armed Forces (RCAF) involving helicopter-borne troops.

Officer Eth Sarath, chief of training for RCAF, told reporters after the demonstration that French navy experts had showed RCAF staff advanced water-survival techniques that the Cambodian military hoped to someday use.

"The RCAF and French navy showed their capabilities in Sihanoukville by using helicopters to save victims from drowning in the sea," he said.

He added that the two sides took part in a friendly game of football after the demonstration. "There was also a [helicopter rescue] demonstration at Brigade 911 [headquarters] on the outskirts of Phnom Penh," he said.

Cambodia and France have been exchanging military expertise for more than a decade, Eth Sarath said.

"The French government also assisted Cambodia in training its military police," he added.

But Gerard Valin, commander of the French Navy's Indian Ocean Maritime Area, told reporters that this was the first time that French naval expertise has been on show in Cambodia.

"I am very proud to come here today ... we [France] have been cooperating with RCAF for more than 10 years," he said.

"The helicopter is used to help victims who are drowning in the sea or hostages kidnapped by ocean thieves," Valin said.

Valin added that the French government has not yet made any plans to donate equipment to RCAF.

A helicopter captain for RCAF who identified himself only as Karkaya told reporters that the demonstration was a success and RCAF was now hoping to acquire helicopters of its own to use on similar missions.

"Our most important mission is against drug smuggling and illegal weapon smuggling," he said.The helicopters, he added, would help RCAF to patrol the coastline for any illegal activity.

The French warship is to depart Cambodia for Kuantan in Malaysia on Wednesday.
Posted by CAAI News Media at 6:14 am