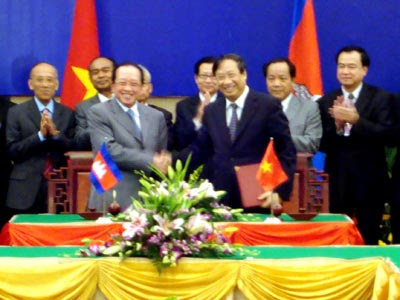 They stressed the need to intensify trade and services activities to increase two-way trade turnover to 2 billion USD by 2010.

They pledged to facilitate the cooperation of businesses involved in projects to build hydro-electricity power plants, explore and exploit oil and gas reserves and develop telecom services as well as to encourage localities, particularly those lying along the borders of the two countries, to further their cooperation.

The officials agreed to upgrade several border gates to facilitate economic and cultural exchanges between the two countries and their localities, increase cooperation in matters of national security and the fight against trans-national crime, and continue conducting joint-patrols at sea.

The session appreciated that, following the ninth session in August 2007, the two countries saw significant developments in bilateral cooperation, particularly in the fields of the economy, trade and investment, education, tourism, banking and health care.

The border demarcation and landmark plantation work has been accelerated in order to be completed as scheduled in 2012.

After the session, the two Deputy PMs signed the session’s minutes and agreed to convene the 11th session in Cambodia in 2009.