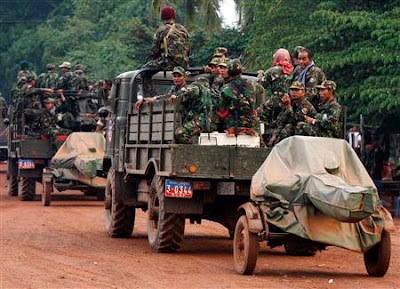 PREAH VIHEAR, Cambodia (Reuters) - Thai and Cambodian military commanders prepared for talks across their disputed border on Thursday after the most serious clash in years left two Cambodian soldiers dead and 10 Thais in Cambodian hands.

Despite Wednesday's 40-minute exchange of rocket and gun fire, Cambodian Foreign Minister Hor Namhong said a scheduled meeting to resolve arguments over the jungle frontier would go ahead, suggesting escalation was not inevitable.

"It is a good sign that we can start to solve this conflict," he told reporters in Phnom Penh after an emergency meeting with Prime Minister Hun Sen about the fighting near the 900-year-old Preah Vihear temple.

"We consider this an incident between soldiers and not an invasion by Thailand," Hor Namhong said.

The talks were due to begin at 11 a.m. at a location near the disputed temple, known to Thais as Khao Phra Viharn.

Thai regional army commander Wiboonsak Neeparn told Reuters the meeting would focus on the cause of Wednesday's clash and how to ratchet down tensions on the border, where both sides have rushed reinforcements.

There has been no word on the exchange of 10 Thai prisoners, whose existence Bangkok is officially denying.

Hor Namhong said the group, who were photographed by a Reuters photographer under Cambodian guard, would be properly treated and returned to Thailand if Bangkok requested.

Bangkok has urged its citizens to leave Cambodia, mindful of the 2003 torching of its embassy and Thai businesses in Phnom Penh by a nationalist mob incensed by a row over Angkor Wat, another ancient temple.

"Thai businessmen who have no need to be in Cambodia now, please rush back to Thailand," Foreign Minister Sompong Amornvivat told reporters, adding that the military had an evacuation plan ready if needed.

In 2003, Thai commandos flew into Phnom Penh airport in the middle of the night to help evacuate 600 Thais during the riots.

Security was beefed up outside the Thai embassy in Phnom Penh, with 20 military police armed with assault rifles standing guard.

Both sides accused each other of firing first in the clash, which comes amid huge political instability in Bangkok, with protesters in a long-running street campaign urging the army to launch a coup against the elected government.

"The Thai military are very much under pressure to protect the national sovereignty and territory," Panitan Wattanayagorn, a military analyst at Bangkok's Chulalongkorn University said.