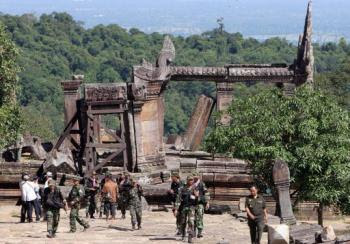 The officials met at a hotel in Cambodia's tourist hub of Siem Reap for three days of negotiations in an attempt to end a four-month military stand-off and to begin to hammer out their competing territorial claims.

The foreign ministers of both countries are scheduled to meet on Wednesday, officials said.

Shortly after a round of talks failed last month, troops from the two countries clashed on October 15 on disputed land near Cambodia's ancient Preah Vihear temple, killing one Thai and three Cambodians.

The Cambodian-Thai border has never been fully demarcated, in part because it is littered with landmines left over from decades of war in Cambodia.

The most recent tensions began in July when the 11th century Khmer temple was awarded United Nations World Heritage status, rekindling a long-running disagreement over ownership of the surrounding land.
Posted by CAAI News Media at 10:07 pm