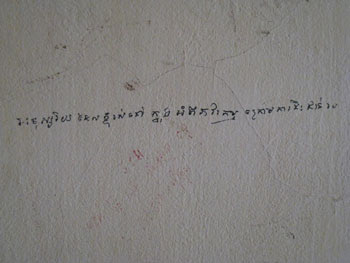 Photo by: PHOTO SUPPLIED
"This is to mark that I lived in terror under oppression," reads this message scrawled by a detainee at Prey Speu.
The Phnom Penh Post

Human rights monitors call for two government social affairs centres to be shuttered, saying that they are covert detention and punishment facilities where abuse and violence are rampant

LOCAL human rights group Licadho has for the second time demanded the closure of two "rehabilitation centres" on the city's outskirts, which the organisation says are being used as detention centers for street people removed as part of a government attempt to "beautify" the city.

In June, Licadho called for the immediate closure of the two centres - Prey Speu and Koh Kor - at which rights monitors observed the unlawful detention and abuse of detainees.

These included the alleged beating to death of at least three detainees and the gang rape of women detainees by guards at Prey Speu.

"Licadho deplores the government's continued failure to take proper action to investigate and punish systematic abuses committed at the Prey Speu and Koh Kor Social Affairs Centres, and to ensure that such abuses cannot occur again," the organisation said in a statement issued on Sunday.

Am Sam Ath, a monitoring supervisor at Licadho, said that the organisation was forced to again call for the closure of the centres after last week's statements from Ministry of Social Affairs officials, who said detainees at Prey Speu and Koh Kor - former street people - were living in them under a "volunteer policy".

"We still urge their closure and ask the government to create an independent body to investigate the accusations that these [centres are] likely used for detention, punishment and killing," he said.

Am Sam Ath added that Licadho staff were allowed to enter the Prey Speu facility in Phnom Penh's Dangkor district on Thursday after months of being denied access.

"We observed around 100 families staying voluntarily in Prey Speu on that day," he said.

He added, however, that rights investigators were allowed entry only after previous accusations of abuse were made public, and the government likely made improvements.

"They are not detained. They receive good care, but no vocational training class," he said. "We want the government to ensure that it is a real rehabilitation centre."

According to the statement, Licadho's visit to Prey Speu uncovered evidence that it was being used to keep people in detention.

"Rear windows were nailed shut, in which numerous former detainees have told Licadho they were confined," the statement said, adding that only the closure of Prey Speu and Koh Kor and the punishment of those responsible for committing crimes would ensure justice is done.

Say Siphonn, secretary of state in the Ministry of Social Affairs, said Sunday that he has not yet received the Licadho statement calling for the closure of the centres and declined to comment on what action the government has taken so far.

Say Siphonn told the Post Thursday that the facilities were "not detention centres".
Posted by CAAI News Media at 9:38 pm