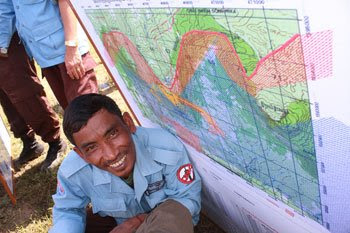 Following a flag-raising ceremony on November 7, Thailand seems likely to backtrack on previous support for Cambodia's claim to Preah Vihear

CAMBODIA'S flag-raising ceremony at Preah Vihear temple last week may have sparked a new series of diplomatic hostilities with its neighbour, as there is movement in the Thai government to backtrack on its previous support for Cambodia's right to lay claim to the ancient temple, according to Thai media.

The Thai Foreign Affairs Ministry announced Tuesday that it would ask the Cabinet to retract the original three resolutions from May and June giving Cambodia permission to unilaterally seek the listing of Preah Vihear as a Unesco World Heritage site, according to reports in the English-language daily The Nation.

But Koy Kuong, an undersecretary of state at the Ministry of Foreign Affairs, told the Post that Unesco's approval of the listing could not be amended.

He attributed the Thai Foreign Ministry's reported plans to "political infighting", and said they would not substantially damage negotiations over border demarcation.

Phay Siphan, spokesman for the Council of Ministers, said that "Unesco is not involved in this kind of politicking".

"Cambodia's inscription is under international protection" and cannot be reversed, he added.

He said Cambodia's internationally-recognised ownership of the temple was reaffirmed by the November 7 ceremony at which its officials raised the national and Unesco flags on its grounds - a move that prompted Thailand to lodge an official complaint with Cambodia, claiming parts of the ceremony took place on Thai soil.

" UNESCO is not involved in this kind of politicking. "

The Cambodian Foreign Affairs Ministry said it was preparing a response to be released "as soon as possible".

Thitinan Pongsudhirak, a political analyst at Bangkok's Chulalongkorn University, said the prolonged civil unrest in Bangkok has significantly hindered the Thai government's ability to advance consistent policies - a problem, he said, that will hurt its image as a reliable negotiator.

"The new constitution has been a major roadblock to the Thai government when trying to move forward in negotiations since it has created many new terms and conditions."

Most relevant to the border dispute, it requires that any treaty with a foreign government be approved by parliament, he said, adding that its struggles in adjusting to new rules of conduct would not excuse the Thai government from reneging on previously held agreements.

"When a country walks out of a treaty, its image is going to be hurt," he said.

Khem Sophoan, director general of the Cambodian Mine Action Center (CMAC), said Thai claims that Cambodia had established new land mine fields along the shared border were unfounded.

Cambodia will address the claims during meetings beginning Monday in Geneva with the UN and international organisations involved in de-mining, according to Heng Ratana, deputy director general of CMAC, who will attend the talks.
Posted by CAAI News Media at 9:57 pm