Cambodia and Thailand might meet for border talks in January 2009 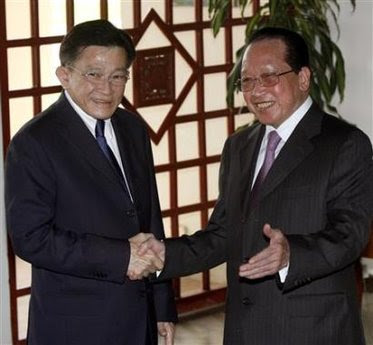 Cambodian officials said that the Khmer-Thai Joint Boundary Commission plans to meet for border talks in January next year.

Government officials said that the Khmer-Thai Joint Boundary Commission plans to meet in January after the border talks between the two countries have stalled due to the political crisis and the change of government in Thailand.

Chairman of the Cambodian Border Commission, Mr. Var Kim Hong, said on 25th December that he had received news from the Thai Foreign Ministry through the Thai embassy that all the documents agreed with Cambodia recently will be put to the Thai parliament for approval which will be convened at the end of January next year.

Mr. Var Kim Hong said that the next Khmer-Thai border talks will be held in Thailand but added that there is no timetable yet because they have to wait for the Thai parliament to approve the previous documents first.

Mr. Var Kim Hong said: “The meeting for talks on land boundary issues will be held in Thailand but there is no timetable for the actual planting of the border pillars have been decided yet.”

Mr. Hor Namhong, foreign minister of Cambodia, has said that during the third border talks in Siem Reap on 12th November, 2008, he had requested for the withdrawals of all Thai troops from Wat Keo Sekhakirisvarak pagoda and the areas surrounding the Preah Vihear temple.

Mr. Hor Namhong said: “Cambodia had requested Thailand to withdraw all their troops from Wat Keo Sekhakirisvarak, from the areas around the pagoda and from the vicinity of the pagoda. It means that they have to withdraw much further then their present positions. Regarding the troops withdrawal, we told them that after the Thai parliament approved the agreements we all will start the withdrawals.

"There are reports that, in Tatum and Anlong Veng areas in Banteay Meanchey province, Cambodian troops are on high alert because Thai troops are staging military drills in the areas.
Posted by CAAI News Media at 8:33 am