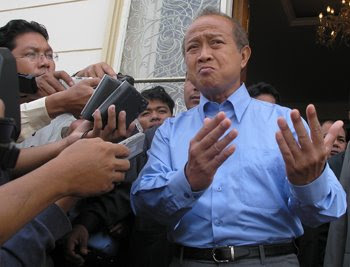 Photo by: Heng Chivoan
The departure from politics of Prince Norodom Ranariddh, pictured in a file photo, has paved the way for royalist alliance, officials say.
The Phnom Penh Post

OFFICIALS from the royalist Norodom Ranariddh Party and Funcinpec say they have reached an agreement to cooperate in district and provincial elections scheduled for May next year.

NRP spokesman Suth Dina said Sunday leaders of both parties agreed to help each other in districts where collaboration could win a mandate, but was quick to dismiss any rumour that the parties would formally unite.

"I would like to say clearly that this is not a merging of the two parties. It is simply a strategy to help each party increase votes for the upcoming election," he said.

Cooperation will consist largely of each party voting for the other in areas where a few extra ballots could mean a win for either party, Suth Dina said.

But he added that there are no plans for such cooperation in the next national polls in 2013."If both parties do not work together in the district and provincial elections, they would lose votes," said Lu Laysreng, first deputy president of Funcinpec, who added that if the partnership showed good results, the two parties might work together in the future.

He suggested that a future merger could heal the rift that has seen both parties fall into greater obscurity in recent national polls.

"The separation has made both parties weak. Now that [Prince] Norodom Ranariddh has joined the Royal Palace, all NRP members should come back and make Funcinpec stronger," Lu Laysreng said.

He added that the recent announcement of defections to the ruling Cambodian People's Party is not a concern for the parties."I don't believe they have abandoned Funcinpec," he said.
Posted by CAAI News Media at 11:37 pm