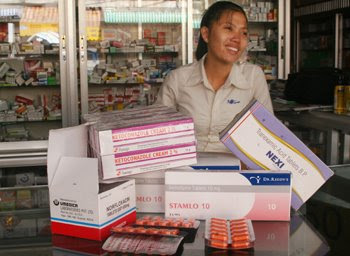 Photo by: Tracey Shelton
A local pharmacist displays an assortment of imported medications. Many drugs on Cambodian shelves are imported knockoffs.
The Phnom Penh Post

Written by May Kunmakara
Friday, 26 December 2008

AN Indian investment group has tabled a plan at the Cambodian Chamber of Commerce to recruit private partners to build a new pharmaceuticals manufacturing plant in Cambodia, the body's director general, Nguon Ming Tech, told the Post.

He did not identify the investors but said they were prepared to devote up to US$1 million to the new facility in a push to curb counterfeit drugs in Cambodia.

"They are interested in this sector because they don't want to see Cambodia rely on imported drugs," Nguon Ming Tech said.

"Thousands of pharmacies in the country offer imported medicine, much of which is counterfeit."

Yim Yann, president of the Pharmacists Association of Cambodia, said Cambodia has about 1,000 registered pharmacies, with an additional 1,000 pharmacies operating illegally.

"I think a new pharmaceuticals factory will bring new technology to Cambodia and will be able to take advantage of local resources," he said.

"Presently, there are only seven local pharmaceutical factories, which can produce only basic medicine and which serves only about 20 percent of the population."

"A new factory must be able to produce specialised drugs. Otherwise, it will be of little use to us," Yim Yann said, adding that Cambodia spends nearly $100 million on specialised medicines each year.

Nguon Ming Tech said India is a leader in the manufacture of pharmaceuticals and that a facility to produce drugs locally would represent a significant developmental step for the country.

"The Cambodian Chamber of Commerce strongly supports the investment plan because it will improve health care in the country by allowing the production of locally made and safe medicines," he said.

"The Indian investment group wants to establish a partnership with local business people, and we are waiting to see their official proposal. Now, we are only helping to facilitate negotiations with relevant government ministries," he said.

Health Minister Mam Bun Heng said on Sunday that he welcomed investment in the pharmaceuticals sector but warned that any such plan must comply with foreign investment rules.

He said many kinds of medicines are available across the nation but acknowledged the benefits of a local manufacturing plant.

"If the proposed factory can produce specialised medicine for the treatment of heart and lung disease, cancer and liver ailments ... this would be very crucial for our country," he said.

He said curbing drug counterfeiting remains a priority for the Health Ministry.
Posted by CAAI News Media at 7:55 am