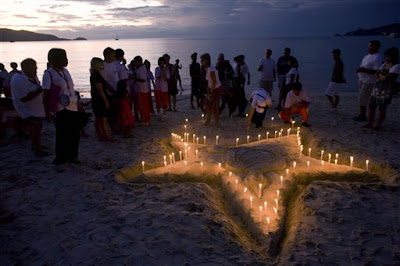 Western tourist and others gather to light candles during remembrance services at Dolphin Park on Patong Beach in Phuket, Thailand, Friday, Dec. 26, 2008, on the fourth anniversary of the Asian Tsunami.More than 230,000 people were killed when the tsunami struck Dec. 26, 2004.

BANGKOK, Thailand (Map, News) - Scientists thought it would take a decade for Southeast Asia's coral reefs to heal after 2004's deadly tsunami but they said Friday that Indonesia's reefs have bounced back with surprising speed, restoring livelihoods to countless small communities.
The findings came as communities across the Indian Ocean remembered the disaster that struck Dec. 26, 2004 with prayers, songs and tears. About 230,000 people were killed in a dozen countries when a magnitude 9.0 earthquake triggered the tsunami.

Surveys of coral reefs after the tsunami showed that up to one-third were damaged and experts predicted it would take a decade for them to fully recover.

Scientists from the New York-based Wildlife Conservation Society, working with the Indonesian government and the Australian Research Council Centre of Excellence for Coral Reef Studies, said their examination of 60 sites on 497 miles (800 kilometers) of coastline along Indonesia's Aceh province showed the reefs were bouncing back.

"On the 4th anniversary of the tsunami, this is a great story of ecosystem resilience and recovery," said Stuart Campbell, coordinator of the Wildlife Conservation Society's Indonesia Marine Program.

"Our scientific monitoring is showing rapid growth of young corals in areas where the tsunami caused damage, and also the return of new generations of corals in areas previously damaged by destructive fishing," Campbell said in a statement. "These findings provide new insights into coral recovery processes that can help us manage coral reefs in the face of climate change."

The tsunami decimated coastlines across the Indian Ocean, wiping out villages, killing entire families and crippling the economies in parts of Indonesia, Sri Lanka and Thailand.

The United Nations estimated that Aceh alone lost $332.4 million ($1,599/ha) from the loss of its reefs to the destructive waves.

But four years on, the multibillion dollar rebuilding process is almost complete with more than 120,000 homes built in Aceh alone and the reconstruction of tourist hotels and restaurants along Thailand's Andaman coast.

Thousands gathered Friday to celebrate the progress but to also remember the dead and reflect on a tragedy that turned their lives upside down.

"I don't think people will ever forget the tsunami. It changed a lot of people's lives," said Alisara Na-Takuatung, a local Phuket radio disc jockey who took part in a ceremony on Thailand's Patong beach attended by 200 people.

About 50 Buddhist monks prayed while school children played traditional Thai instruments.
"I know people who lost their husbands, their kids. Those people won't forget about the tsunami," she said. "They will see it as a lesson. You think about what you can do for others."

Ibrahim Musa, a 42-year-old civil servant who joined thousands in a prayer service in the hard-hit Aceh province of Indonesia, said it feels like yesterday that his family was taken by the sea.

"Even after four years, I cannot forget how I lost hold of my wife and baby," he said. "I have tried in vain to look for them for three years. Now I have no choice but to accept their departure as destiny."

Siti Hasnaini, 40, who still lives with her two sons and husband in a temporary shelter in Aceh, prayed "for my daughter who was washed away with my house."

In India, where thousands also perished, interfaith prayers and a moment of silence were held. The Sri Lankan government declared two minutes of silence for the 35,000 people killed there as well as other victims of natural disasters.

The healing trend embraced by those devastated by the tsunami has extended to the reefs with communities responding to calls to protect them from illegal fishing, pollution and coastal development.

Campbell said citizens have been particularly responsive in Aceh where fishermen have stopped using illegal techniques like dynamite and villagers have transplanted corals into areas that were hardest hit.

"The recovery, which is in part due to improved management and the direct assistance of local people, gives enormous hope that coral reefs in this remote region can return to their previous condition and provide local communities with the resources they need to prosper," Campbell said.

Ove Hoegh-Guldberg, a reef expert from the University of Queensland in Australia who did not take part in the study, said the findings were not surprising since corals typically will recover if not affected by fishing and coastal development.

"The mechanical damage from the tsunami left a whole bunch of shattered corals on the bottom of the sea," Hoegh-Guldberg said.

"Left alone, these things can quickly grow back into what looks like a coral reef in a short time," he said. "We are seeing similar things around the southern Great Barrier Reef where reefs that experience major catastrophe can bounce back quite quickly."

John Bruno, a reef expert from the University of North Carolina at Chapel Hill, agreed saying it shows coral reefs are able to recover after severe disturbances.

"There has been so much bad news about coral decline lately, and the threats to corals seem to increase every year. It is important to recognize that these invaluable ecosystems are not lost," he said in an e-mail interview. "We just have to implement some common sense policies locally and substantially reduce emissions of greenhouse gases at a global scale."
Posted by CAAI News Media at 10:02 pm