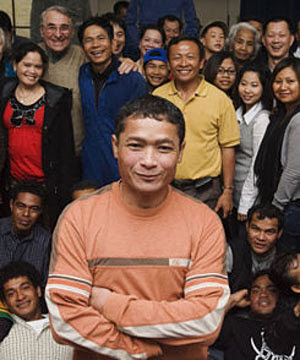 A Cambodian refugee has escaped deportation after an 11th-hour government reprieve.

Friends of Sokhom Pich celebrated his return to Christchurch with a party on Saturday night.

Former associate immigration minister Shane Jones decided to release Pich and allow him to apply for permanent residency just one hour before he was to be deported on November 4.
Members of Christchurch's Cambodian community had appealed to the then Labour government to allow Pich to stay in the country after he was arrested as an overstayer in September.

After living in New Zealand for 11 years, the 47-year-old had exhausted every legal avenue in his bid to remain in the country as a political refugee despite fears he would be imprisoned and possibly killed if he was sent back to Cambodia.

Just an hour before boarding a plane in Auckland, he received the news that he could stay.

"I was surprised because in Auckland I was feeling everything was over. For 20 seconds I couldn't say anything."

Pich said he was a member of the opposition Sam Rainsy Party in his home country which criticised the government for corruption and cracking down on political dissent.

"If the government is not good, people live without houses and food and that's not good for the people," he said.

Pich said a number of his fellow party members had disappeared or been killed and he feared a similar fate. "I felt scared and quite nervous about being sent home, but after it came closer and closer I wasn't scared, I wasn't anything."

Cambodian community adviser Bill Noordanus said Cambodian law meant Pich would have been imprisoned for more than three years if he was sent home as he had left the country illegally.

"He's a very fine man. He's an idealist and like all idealists they sometimes clash with the authorities."
Posted by CAAI News Media at 7:55 am