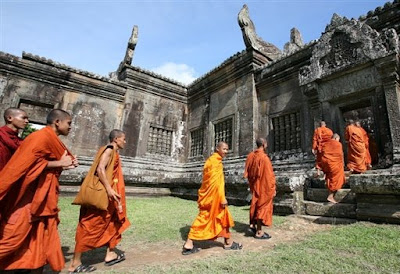 Cambodian monks have persuaded authorities to ban the country's first rock opera, which features actors dressed as clergy who break into song and dance, saying it insults Buddhism.

In a letter sent to the ministry of cults and religion, as well as to the media, the Supreme Sangha Council of Buddhist Monks also demanded an apology from the show's director, writer and actors.

"Where Elephants Weep", a modern take on a traditional Cambodian love story that merges pop and rock music with more traditional and historical Cambodian tunes, played in Phnom Penh from late November through early December.

It tells the story a Cambodian-American man who returns after the demise of the 1970s Khmer Rouge regime to reconnect with his roots. While he is a monk, he falls into a doomed love affair with a pop singer.

The last straw came when the show was aired by a local television station last week, prompting the monks' council to write to complain.

Cambodia is predominantly Buddhist and monks are expected to be austere and eschew worldly pleasures such as entertainment.

"Some scenes in the story insult Buddhism," the letter said in asking the ministry to "ban the performance and airing of the opera."

The council objected to many scenes, including one in which the actor "left the monkhood and slept with a woman, but a moment later (he) put the robe back on to be a monk again..." said the letter, dated December 30.

The show "oppresses Cambodian Buddhist monks, causes more than 50,000 monks to loss their honour, value and to express frustration," it added.

Religions minister Min Khin duly stepped in and the television station was ordered not to go ahead with a second broadcast planned for New Year's Day.

The show had a successful US preview last year and, after its run ends in Cambodia, it is expected to tour South Korea, Singapore, Hong Kong and Japan before returning to the United States.

Organisers behind the opera were not immediately available for comment.
Posted by CAAI News Media at 11:51 pm