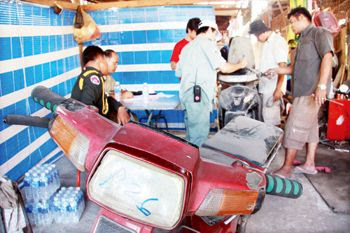 Police seized more than a thousand motorbikes from pawnshops across Phnom Penh this week in an effort to crack down on motorbike theft, police officials said.

"In each place, we found 70 to 100 motorbikes without [licence]plate numbers, [vehicle] tax numbers or proper identification, so they may have been involved in a larceny", he said.

Kuch Chamroeun, governor of Meanchey district, said Sunday that police removed 286 motorbikes from a single pawnshop in the area and detained the owner for questioning, adding that he suspected illegal activities.

Police are now checking the bikes' licence codes and engine numbers, and will ask pawnshop owners to produce the matching documents, the officials said.

"Pawnshop owners will be interrogated if we find they were pawning illegal motorbikes without proper documents," Seng Rattanak said.

The officials invited victims of motorbike theft to retrieve their property from district police stations by bringing both their ownership certificate and the bike's vehicle tax certificate.Pol Pithey said he was trying to contact other provincial commissioners in order to identify the owners of stolen vehicles.

The crackdown on illegal pawnshops followed an order from Prime Minister Hun Sen to maintain security, Seng Rattanak said, explaining that trade in stolen goods was a threat to society.

Men Phally, who owns a pawnshop for motorbikes and cars at Stung Meanchey commune, said on Sunday she appreciates the police action.

"I welcome the crackdown because I see that there are still several shops in Phnom Penh that receive motorbikes without proper documents but sell them for a high profit."

"My shop always pays careful attention to the motorbikes because we are afraid that, if we receive stolen goods without legal documents, we will be accused of receiving illegal property," she said, adding that her shop has never had any problems in its many years in business.
Posted by CAAI News Media at 11:30 pm