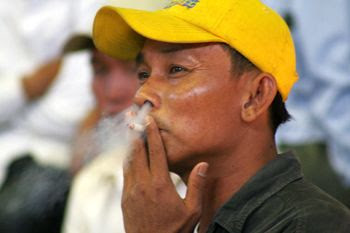 Photo by: Tracey Shelton
A man enjoys a cigarette at the old stadium in Phnom Penh.

A low awareness of smoking-related illnesses such as chronic bronchitis is putting more Cambodians at risk.

DOCTORS say they are becoming increasingly alarmed by the high number of people suffering from chronic obstructive pulmonary disease, a type of smoking-induced bronchitis that frequently leads to death.

Despite rising awareness of the links between smoking and cancer, people in Cambodia know little of the connection between cigarettes and other types of illnesses, doctors say.

"Poisonous substances in cigarettes give smokers inflammation in their lungs, which eventually becomes chronic bronchitis," said Vann Mich, chief of the Department of Pneumatology at the Khmer-Soviet Friendship Hospital and secretary general of the Cambodia Society of Medicine.

"It destroys the elasticity in the lung cells, which reduces the ventilation movements of the lung," he told the Post last week.

Vann Mich estimated that 90 percent of people who smoke a packet of cigarettes a day for 20 years will likely face this type of bronchitis.

"The disease] is not really a cancer. It is a different type of lung disease that is particularly caused by smoking. This kind of disease can be cured only by a very slim chance," Vann Mich said, adding that his hospital received as many as 20 patients per month.

Eav Sokha, the chief oncologist-radiation therapist at the Center of Oncology in Phnom Penh and the secretary general of the Cambodian Society for Oncology, said that more recognition needed to be given to smoking-related illnesses other than cancer.

"Since I became a doctor, I have also seen people who do not smoke get cancer," he said.

Prak Prang, a 79-year-old suffering from smoking-related bronchitis, has been receiving treatment at Vann Mich's hospital since he felt like he had water in his lungs a week ago.

"I never knew that smoking caused lung disease like this," he said.

"Now I have found out that I am in too serious condition to be treated," he added.

"If I could rewind time, I would not touch even a single cigarette."

According to the National Statistics Institute, 53.9 percent of men and six percent of women in Cambodia over the age of 20 smoke.
Posted by CAAI News Media at 7:35 am