Services for poor to improve 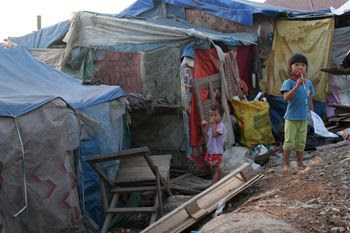 Photo by: Tracey Shelton
Children play at their homes in an inner city slum in the capital.

NOT ENOUGH
Theary Seng, of the Center for Social Development, said the plan would not guarantee that Cambodia's poor get the services they require as corruption, ineffective political and economic systems, and a lack of future vision are key factors that drive poverty in Cambodia.

The government says that by better identifying poor households, it will be able to target the delivery of more efficient social services.

THE government has announced a new national plan to standardise the identification of Cambodia's poorest families in an effort to improve social services and reduce poverty, Finance Minister Keat Chhon said, adding that the new system will help the government obtain more accurate data.

"Under this program, we believe we will help promote human and economic development, and foster social and political stability," Keat Chhon said last week.

Currently, various government offices and NGOs have been identifying poor households by different methods and in an uncoordinated way, and the data has not been shared among these institutions and organisations, Keat Chhon said.

"The government will issue a sub-decree to better facilitate the identification of poor households and to ensure harmonisation in order to use our limited development resources more efficiently," he said.

As of October last year, the Ministry of Planning had catalogued poor households in 2,128 villages across five provinces and expects to cover more than 2,900 more villages in five additional provinces this year, he said, adding that the ministry wants to cover all villages in the country by 2011.

"I have proposed that the Ministry of Planning prepare a cost analysis for the expansion of the identification program, and that it be presented for consideration in the framework of the national budget, as well as to development partners for their support," Keat Chhon said.

"Ultimately, we believe all poor households in the country will receive more efficient social services," he said.

Chhit Sam Ath, executive director of NGO Forum, said a more efficient approach to poverty reduction would benefit the poor, but added that identifying people in need was not difficult.

He said any national program needed to deal fairly with the country's rural poor, many of whom have faced inequitable aid distribution in the past.

"[The identification program] should not be biased or discriminatory in its procedures because we have seen in the past that poor households do not always receive their fair share of aid," Chhit Sam Ath said.

He said any list of rural poor must be reviewed regularly because households deemed non-poor could easily become impoverished in the future.

"Villagers, civil society groups and other institutions should actively participate in the program to ensure the accuracy of the identification process," he said.

Bou Vanna, public relations manager for the Ministry of Planning, said the government has spent more than US$1.3 million to identify needy households in five provinces.

The government evaluates need based on sources of income and other factors, including ownership of land and agricultural equipment, he said, adding that subsequent reviews by teams traveling from household to household will be made every two years to identify changes in economic status.

According to a Planning Ministry report from 2007, Cambodia's largest percentage of poor households comes from farmers, most of whom own only small plots of land. The second-largest group comprises individuals with no steady source of income.

The government expects to spend an additional $1.3 million to carry out its identification program through 2009, with funds being provided by the German nongovernmental organisation GTZ.

Daniel Haas, first secretary of development cooperation at the German embassy, said his government would continue providing technical and financial support for the identification program.

"I think the proposed national plan will be an improvement over past efforts and will better achieve the national reforms of decentralisation and deconcentration," Haas said.

Roughly a third of Cambodia's 14 million people are living in poverty, defined by subsisting on less than $1 a day.
Posted by CAAI News Media at 7:59 am