We have no home, say evictees 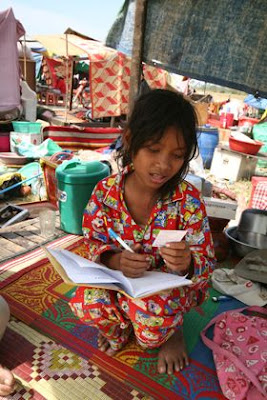 Photo by: TRACEY SHELTON
In her makeshift home at the relocation site, Srey Na, 12, holds an English textbook for a class in the city she says she can no longer attend.
The Phnom Penh Post

ONLY 27 families among the scores evicted from Dey Krahorm Saturday morning have so far been assigned homes at the Damnak Trayoeng relocation site built by private developer 7NG, while hundreds of other residents trucked out to the village are squatting in fields without access to clean water or electricity, many told the Post.

"Even the homes that have been assigned have no water, no toilets," said Kim Ratana, deputy director of the aid group Caritas.

The last families evicted had still not agreed to compensation, arguing the cash was insufficient and the relocation homes were too far from their livelihoods in the city.

While 7NG said around 80 families had remained in Dey Krahorm until the eviction, rights groups have put the number at closer to 150.

"I collapsed in tears when I saw my house trampled by a bulldozer," said 33-year-old Sin Mao, adding she had a land title. "When they drove us to the relocation site, they said they would resolve everything, but we've received nothing so far. We're just living on the street."

While most of the evictees were shuttled to the relocation site by 7NG trucks, some 30 families refused to go there and instead are living in the Phnom Penh office of local rights group Licadho, which is providing legal assistance to evictees during compensation negotiations.

Dul Chanta, 51, who is staying at Licadho's office, fainted Saturday after watching a bulldozer demolish her home, and was later hospitalised from exposure to tear gas, which several said was used by some of the 200 police presiding over the eviction in response to residents throwing stones.

She said she lost most of her possessions, having had only 10 minutes from the time she saw workers and police outside her home to the moment bulldozers rolled over it.

She said authorities chose the weekend to evict the remaining residents as there would be fewer bystanders in the area.

Srey Sothea, the 7NG chairman, reiterated Sunday that offers of cash compensation had been discontinued following Saturday's eviction. He rejected claims by residents that the stationing of police around the complex during the night was a move designed to seal the area off from the media and possible intervention by rights groups.

"We told them about it the night before the removal. We told them to prepare their belongings, but they did not believe us," he said.

Municipal Police Chief Touch Naruth declined to comment Sunday, and he referred questions to Phnom Penh Deputy Governor Mann Chhoeun, who could not be reached.

David Pred, director of Bridges Across Borders Southeast Asia, said that by retracting cash payouts as an option, the developer was breaking past promises.

"Mann Choeun has stated at two press conferences - at the Cambodian Press Club on January 13 and again Saturday - that the residents would still be able to choose between cash compensation or a flat at the relocation site even after the eviction," he said, adding that even cash payouts would not provide just compensation.

"The families who do have valid legal claims to the land were under no legal obligation to accept the company's compensation offer," Pred said. "They had every right to reject it and remain on their land and in their homes. If the company wants the land, they need to offer the homeowners a price that they were willing to accept."

An estimated 800 to 1,400 residents lived in Dey Krahorm before old community leaders signed a contract with 7NG in 2005, giving the company the 3.6-hectare property in return for building relocation houses in Damnak Trayoeng village. Land rights groups have challenged the legality of the original contract and accused city officials and 7NG of using intimidation to force residents to accept compensation deals.

Rights advocates providing relief food and medical services at the relocation site said the area is woefully unprepared to absorb the evictees.

"If they move far from the city, there are no jobs or schools. It's not just the house, it's about their ability to carry on with everyday life," he said.

Pred said that for residents the move "would constitute a complete disruption of every aspect of their lives ... and would almost certainly result in deeper impoverishment".

Kim Ratana said the isolation would be especially dire for the more than 30 evictees with HIV as well as others suffering from tuberculosis and other serious diseases who require access to free treatment centres in the city.

Manfred Homung, a legal consultant with Licadho, said the combination of injuries and loss of possessions endured during the eviction and imminent food and water shortages at the relocation site could prove intolerable.

He said the relocation site's resources are being stretched by renters and market vendors evicted from Dey Krahorm, who have never been eligible for compensation under the scheme devised by the municipality and private developer.

A second forced removal by authorities was imminent, he said, once hundreds of homeless are left there after 7NG decides it has compensated all the families it needs to.

The developer revealed Sunday a rough outline of its plans for Dey Krahorm.

Chairman Srey Sothea said it would be "transformed" into a space for a park, office buildings and trade centre.

He added his company was interested in acquiring the Bassac apartment buildings adjacent to Dey Krahorm but expected they would carry a steep price tag. It would likely be a tough showdown with other developers who are "also interested in developing this building", he said.

ADDITIONAL REPORTING BY MAY TITTHARA
Posted by CAAI News Media at 10:54 pm