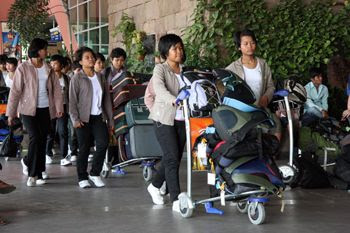 SCA's CEO
Nicholas Deviller, 41, was appointed chief executive officer of SCA in April 2008. He was, however, also involved in developing Cambodia’s aviation industry from 1998 to 2002 when in charge of SCA’s technical and development department, and he was part of the team that played a critical role in expanding the concession build-transfer-operate contract with the opening of Siem Reap International Airport. Prior to returning to Cambodia, Deviller held several positions at Vinci (SCA’s parent company) at the head office in Paris. He is an engineering graduate from Arts and Metiers in Lille, France.

How is business at Societe Concessionnaire des Aeroports in general? Has it been severely impacted by the global financial crisis?
After four years of double-digit passenger growth at both Phnom Penh and Siem Reap international airports, we had to deal with a slight decrease in 2008. The number of passengers at the two airports slid three percent compared to 2007 and totalled 3.2 million. Siem Reap reported a decrease of 12 percent while passengers through Phnom Penh were up six percent.... Freight activities at Phnom Penh International Airport also took a hit due to the decrease in garment exports overseas.

But, in the long term, we still expect strong growth due to the expansion of tourism and business in Cambodia. As for the short term, especially in 2009, most airlines plan to cut their capacity on existing routes.

Our airports have been adversely impacted by the political situation in Thailand. The closing of Bangkok airport, in particular, had an immediate effect on the number of arrivals at Cambodia's airports. Should there be some sources of resilience and a dim light for hope in 2009, they would come from the following:

Firstly, a few legacy airlines - Korean Air, Vietnam Airlines and Bangkok Airways - have either increased their flight frequencies or used bigger capacity aircraft; secondly, a worldwide cut in fuel prices; thirdly, there are more arrivals of no-frills carriers - Air Asia and JetStar; and fourthly, there's tourism potential. Tourism in Cambodia is still far from reaching full potential, in Sihanoukville in particular. At this point, there are a lot of opportunities to seize for those who invest.

To make the most of these opportunities, we have implemented ... a comprehensive incentive package to attract more airlines, including rebates on fees for our handling services, and programs in partnership with the Ministry of Tourism, tourism operators and hotel operators to promote Sihanoukville and Cambodia as a destination through brochures, press trips and road shows.

Will the global economic downturn affect your workforce?
We are not planning layoffs. Generally speaking, our turnover - rotation in the workforce - is limited and we can rely on highly skilled staff. As for any companies hit by the crisis, Societe Concessionnaire des Aeroports has to reorganise to cope with the situation. However, we have done our best to keep benefits for our employees.

We have implemented a program to help our personnel and their families face the rising costs of food. Twice in 2008, we launched a campaign called "Rice Solidarity", during which each staff member was entitled to buy 100 kilograms of premium rice at a quarter of its market price. In 2009, we have decided to tackle the rising costs of daily life through some compensation in salaries for all our employees.

The country can accommodate eight times the traffic we currently have.

When will Sihanoukville's airport be fully operational?
Sihanoukville is fully operationally now. We have completed major upgrades, such as the extension of the terminals - so that it can accommodate 700,000 passengers per year - the installation of navigational aid equipment, the extension of the runway to 2,500 metres, the same length as Siem Reap's airport. The airport is ready to accommodate the same type of aircraft - ATRs, B737s, A320s - as the airport at Siem Reap. To date, we have invested over US$28 million in it.

The airport has had charter flights but regular flights have yet to operate there. We have been in active talks with airlines to get them to operate there to and from domestic and international destinations. To encourage airlines to open regular routes through it, we are offering substantial rebates on services provided to them.

With the development of Sihanoukville, including the modernisation of its airport, can it compete with other coastal destinations in the region?
It is obvious for us. We think Sihanoukville could offer even more. The quality of the seaside with pristine beaches, multiple islands and space with a low density of people, in the proximity of the Bokor Mountains and Kampot, make the destination more than on a par with the best resorts.

We have been working with other stakeholders - such as hotels, the government, and tourism operators - to promote Sihanoukville as a destination. The city also has to provide more hotel rooms for a range of budgets to welcome more visitors. It's just a matter of time.

Air traffic has increased over the years. Does capacity need to grow to accommodate the growth?
The country can accommodate eight times the traffic we currently have.

The PMT crash in 2007 and the blacklisting of Siem Reap Airways by the European Union, have these affected consumer trust in Cambodia's airline industry?
Tourism constitutes a pillar of the government's development strategy. The National Assembly enacted last year the Aviation Law to further reinforce the State Secretariat of Civil Aviation in its scope of actions, especially with regard to aviation security.

Cambodia does not decide on its own regarding safety and security rules. They are defined internationally and, for the last few years, there's a general trend towards strengthening the rules.
Posted by CAAI News Media at 9:27 pm