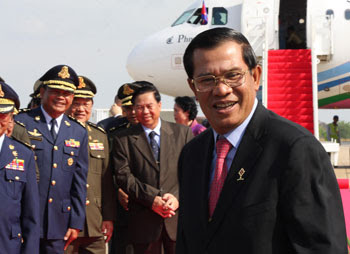 CAMBODIA joined Myanmar's military junta in blocking human rights activists from attending talks during the annual Aseansummit, detracting from a meeting that has been billed as a crucial step forward for human rights in the region.

Leaders from the Association of Southeast Asian Nations' 10 member states were set to hold rare talks Saturday with civil society representatives in the Thai beach resort of Cha-am, but Prime Minister Hun Sen and his Myanmar counterpart Thein Sein reportedly refused to attend if activists from their countries were present.

Pen Somony, a program coordinator for the Cambodia Volunteers for Civil Society, and Khin Ohmar, a rights activist from Myanmar, were both forced to sit out the meeting, instead holding talks with Thai Premier Abhisit Vejjajiva.

The planned Asean human rights body, set forth in the organisation's charter, was expected to be a focus of the talks, but Bridget Welsh, a Southeast Asian specialist at Johns Hopkins University, said the row over civil society participation was instead an indication of Asean's limitations.

"It is truly sad that an organisation known for ‘talk' won't even talk to those working to expand freedom in the region," she said.

"The pandering of Asean to its authoritarian members' demands over a simple dialogue with civil society groups shows how disingenuous the support of human rights is within the organisation."

But Ou Virak, executive director of the Cambodian Centre for Human Rights, said that the response of the Cambodian and Myanmar premiers made little sense as a collusive strategy, since he expected a full-scale attempt to undermine the proposed Asean rights body, which would include communist Vietnam and Laos - two of Asean's serial rights offenders.

He added that while the exclusion of civil society members was to be expected from military-ruled Myanmar, the Cambodian reaction could only be put down to Hun Sen's own attitudes towards civil society.

"It seems that recently [Hun Sen] has gone on the attack, with the proposed introduction of the NGO Law and references to NGOs and civil society as ‘crazy' and ‘deranged'," he said, adding also that a "certain lack of confidence" on the part of two leaders - forced to account for themselves internationally - could also have contributed to the barring of the delegates.

"In a way, they are being challenged by civil society intellectually, and in terms of policy," he said.

But Foreign Minister Hor Namhong said the two delegates were prevented from taking part in talks because they did not appear in a list of civil society organisations contained in the Asean Charter.

"I would like to clarify that Cambodia's delegation ... did not prevent Pen Somoly from entering the meeting," he told reporters on his return
from Thailand Sunday.

"The Thai organisers did not allow these two representatives to join after the government complained [that] the groups did not have names on the civil society list."

Indeed, Pen Somony appears to have a low profile, both locally and internationally. Neither Ou Virak nor Thun Saray, president of local rights group Adhoc, had heard of Pen Somony, and his organisation, Cambodia Volunteers for Civil Society, has no website. There are also few web references to either outside of events at the weekend's summit.

Ou Virak admitted the low profile of the activist could have contributed to his being barred, but said a "higher-profile" rights activist in the same position would also likely have been blocked.

Thun Saray said he could not comment on the specifics of the Pen Somony case, but said civil society involvement was vital if Asean's proposed rights body was to be anything more than a talking shop.

"The Asean Charter recognises the role of civil society to have dialogues with governments," he said.

"This is a crucial time for us to provide input to the draft of the [rights body] document and give recommendations."