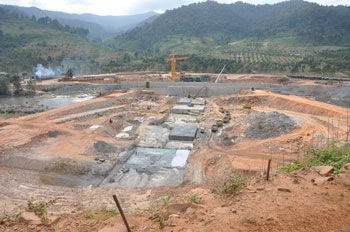 Photo by: MICHAEL HAYES
A dam under construction in Kampot province.
The Phnom Penh Post

A SLEW of hydroelectric dams slated for construction on the Mekong River threaten migratory fish stocks and the millions of people who rely on them for food and income, as well as one of the world's richest sources of aquatic wildlife, warns a new campaign launched by environmentalists.

Eleven dams on the main channel of the Mekong are currently being planned by the governments of Cambodia, Laos and Thailand.

"If built, the dams would block major fish migrations and disrupt this vitally important river, placing at risk millions of people who depend upon the Mekong for their food security and income," said a statement from Save the Mekong, an international coalition of NGOs that launched this month.

Two of the dams are planned for Cambodia. Foreign developers have contracts to build a dam in Stung Treng province near the border with Laos and in the Sambor district of Kratie province. The remaining nine dam sites are in Laos, including two shared projects with Thailand.

The projects could also prove perilous for the Mekong's aquatic biodiversity. The group says the mainstream dams would push endangered species found in Cambodia, including the Irrawaddy Dolphin and Giant Catfish, to the brink of extinction.

Chit Sam Ath, executive director of the NGO Forum on Cambodia, said the Mekong's food value is too critical to be jeopardised.

"The Mekong River is an invaluable source of food security and livelihoods for millions of Cambodians," he said.

The Mekong River Commission estimates the river's wild capture fisheries to be worth at least US$3 billion annually.

NGO Forum is joined by the local NGOs Culture and Environment Preservation Organization, the Sesan-Srepok-Sekong (3S) Protection Network and the Fisheries Action Coalition Team in being local members of the Save the Mekong coalition.

Kim Sangha, with the 3S Protection Network in Ratanakkiri province, said Vietnam's Yali Falls dam on the Sesan River illustrates the destructive effects that even dams outside the country can have on communities within Cambodia.

"It continues to cause changes downstream - villagers complain of water fluctuations, and they say they are struggling to find fish," he said.

Government approved
Chang Tong Yves, a secretary of state at the Ministry of Agriculture, Forestry and Fisheries, said people needed to have faith in the government's ability to weigh the trade-offs of such development projects.

"If the government decides to make a dam, then environmental assessments have been done, so you can know it will not have a destructive effect on the environment or people who live along the river," he said.

Thuk Kroeun Vutha, an undersecretary of state at the Environment Ministry, said his office had completed an Environmental Impact Assessment (EIA) for the two dams and believed the power produced outweighed the environmental damage caused. No non-governmental group contacted by the Post had been able to access a copy of the government's EIA.

"There will be a little bit of environmental impact, but the dam will provide a lot of power to support the country," Thuk Kroeun Vutha said.

Middleton recommended Cambodia leap-frog the "big-hydro" power policies that held sway in many developed countries in the 1950s.

"Current electricity planning in the Mekong region still retains last century's mindset that ‘bigger is better'. There is, however, a growing call for reform of the power planning process by civil society groups throughout the region towards modern planning practices," Middleton said.

Having yet to pour funds into a national power grid, Cambodia is well-positioned to advance with decentralized renewable power technologies such as solar and biogas, he said. Power production assessments should "take into account the full cost to society of each electricity option - including social and environmental costs - rather than simply the lowest commercial cost to investors."
Posted by CAAI News Media at 11:43 pm