From a banking boom to financial hardship 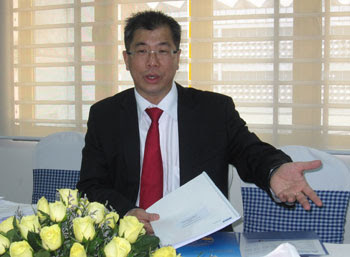 Chan Kok Choy, executive director of Vattanac Bank, speaks to the Post about the onset of the financial crisis, the general outlook for 2009 and how his bank plans to respond.

Has the crisis slowed Vattanac Bank's progress? Do you plan to lay off staff or reduce recruitment to cut costs?
The economic crisis has created a challenging environment for banks in Cambodia, as it is important to maintain good asset quality and satisfactory liquidity.

Our bank has a satisfactory liquidity position, so there are opportunities for the bank to develop further.
As of December 2008, Vattanac Bank had a staff force of 119.

Today, that stands at 133 and we are looking to hire more staff for our credit card business and to support expansion plans.

For the same period, deposits increased $50 million, up 49 percent. For the challenging economic environment in 2009, we will emphasise maintaining the quality of our loans.

We have been encouraged by the strong support we have received from the public.

Late last year, the National Bank of Cambodia (NBC) tripled the registered capital requirement for commercial banks from $13 million to $37.5 million. As a banker, what do you think about this decision?
As of December 2008, our shareholders' funds stood at $32.06 million and we are committed to meeting the new capital requirement as required by the NBC.

We are supportive of the NBC's decision, as we recognise the importance of higher capital to support the bank's business expansion.

Cambodia has 24 commercial banks. Do you think the number is too high?
Every bank has its own focus and business direction. If the bank is well-capitalised and able to develop its own niche market, it has good prospects.... I feel that the NBC is in good hands under the capable leadership of Chea Chanto and its many senior officials.
The NBC recently took the positive step of easing liquidity by reducing the statutory reserve requirement to 12 percent.

What is your vision regarding the banking industry this year given the financial crisis?
Due to the vicious nature of the economic crisis, many economic sectors in Cambodia will be considerably weakened.

As such, I expect this year will be challenging for the banking industry.