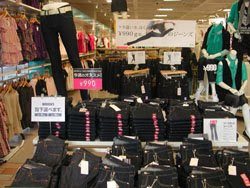 Legs to stand on: Jeans priced at 990 yen are displayed at the Nishikasai g.u. shop in Edogawa Ward, Tokyo, on April 8. MINORU MATSUTANI PHOTO
Uniqlo spinoff g.u. makes a statement with ¥990 dungarees, but profit proving elusive

Nobody can ever have too many pairs of jeans, and thus the philosophy of GOV Retailing is to make them available on the cheap — a notion that is paying off for the new g.u. chain.

GOV Retailing, a wholly owned subsidiary of Fast Retailing Co., began selling ¥990 jeans at its 69 g.u. outlets on March 10. That's a quarter of what denim pants sell for at Fast Retailing's Uniqlo stores, which have set the new standard for low-priced clothing and are thriving on the recession.

"We are offering the lowest possible prices for a pair of jeans, in the process changing the widely held view that jeans have to cost more," GOV President Shuichi Nakajima said in an interview with The Japan Times.

G.U. is off to a hot start. In the first month, sales of the ¥990 jeans were double what the company had expected, leading the firm to raise its annual target to more than 1 million pairs from its initial goal of 500,000.

If the forecast is met, the jeans sales will probably account for about a quarter of the ¥4 billion in combined sales the 69 g.u. outlets across Japan logged in the business year to last August.

Ultracheap jeans made headlines when Fast Retailing President Tadashi Yanai announced a new product lineup at a news conference last month. His Uniqlo chain had already achieved supremacy in the cheap clothing arena, and it appeared he was on a quest to expand further.

"We first thought of selling jeans for ¥1,490, less than a half of ¥3,990 at Uniqlo. But Yanai told us at a weekly meeting in October that ¥990 would have a bigger impact," Nakajima said. "Everybody in the meeting agreed, and then we began working on it."

Before then, GOV employees had been negotiating with factories in Cambodia with the aim of setting the retail price at ¥1,490, but after this decision, Nakajima and his colleagues paid visits to the factories to negotiate further cost cuts. The company uses fabric from China and manufacturers in Cambodia to make the ¥990 jeans.

It also uses the same fabric for as many outfits as possible and shares resources with Fast Retailing, he said, declining comment on further cost-cutting details.

The ¥990 jeans have been a success. "We wouldn't do it if it was losing money," Nakajima said.

Although the profit margin from the jeans may be small, it gives GOV Retailing name recognition and customers who frequent g.u. shops buy other products, Japaninvest Group PLC analyst Mikihiko Yamato said, adding that the Uniqlo connection adds to the ¥990 jeans' reputation.

"Just because they're cheap, it doesn't mean they will sell. But because Uniqlo does it, (the jeans) sell," Yamato said. "Everybody knows Uniqlo for its low prices and decent quality."

The ¥990 jeans are a perfect fit for the recession, when consumers crave cheap goods, he said, noting that the apparel industry has watched sales plunge dramatically since November.

Same-store clothing sales at large department stores fell a record 14 percent in December from a year ago, according to the Ministry of Economy, Trade and Industry. The ministry began releasing the monthly data in 1988.

But same-store sales at Uniqlo in Japan, have shown year-on-year rises in every month except October, according to Fast Retailing, whose business year starts in September. GOV does not disclose statistics for g.u.

Fast Retailing started the g.u. brand in October 2006 and has yet to achieve a profit. It posted a group net profit of ¥35.6 billion in the six months to February, up 26 percent from a year earlier, even after consolidating GOV's loss.

GOV Retailing hopes g.u. can turn a profit by attracting customers with its low prices. Other products include T-shirts and polo shirts selling for half or a third the price of their Uniqlo counterparts.

Analyst Yamato believes the g.u.-Uniqlo price differential means the two chains aren't in competition with each other.

"Everybody knows Uniqlo, but nobody knows g.u.," he said.

University student Saki Obi, 18, hanging out at a g.u. shop in Edogawa Ward, Tokyo, after school recently, said, "Jeans are a type of clothing we cannot have too many of, so it helps a great deal that they are so cheap."

She said it was just a matter of time before she bought a pair, but added, "My mother bought them."
Posted by CAAI News Media at 9:40 pm

Thank you, Ι've recently been searching for information about this topic for a while and yours is the greatest I'νe found out ѕo far.

But, what аbout the bottom linе?