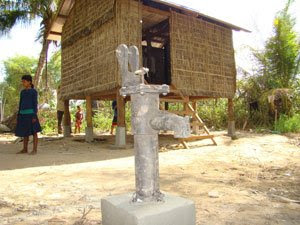 Water buffalo can be dangerous - especially when they jump in front of a moving motorcycle.

For Chico local Scott Dukes, this accident only led to a broken shoulder and wounded foot, but his mission, Water Aid for Cambodia, was worth the injury.

Surprises such as water buffalo accidents, were just a few of the things Dukes encountered in his philanthropic Cambodian travels.

Dukes began donating his time and money to establishing fresh water aid in Cambodia after traveling their with his family in July 2008.

His inspiration was ignited as he talked to his Cambodian guide and translator Ly Heang, while they traveled through the countryside in Siem Reap, Cambodia, Dukes said.

While talking to Heang, Dukes learned that the guide had grown up on a rice farm and had experienced water shortages all of his life, he said.

Heang was raised in the countryside of Siem Reap, Dukes said. When he was a child, the water in his family's well was so low that he fell in when trying to find the waterline.

That experience made Heang's life mission clear - to help his family and others sustain the water supply, Dukes said.

Dukes was so touched by Heang's story, he wanted to see where Heang lived, he said. Heang took him on an adventure into the little village where he grew up.

On the way to Heang's home, Duke met an elderly woman who had lived with malnutrition and bad water all her life.

"(She) asked me to take her picture so that her children could have it when she died to remember her," Dukes said. "That touched me."

Dukes took the photo, developed it, framed it and took it back to the woman, he said. She was grateful for his generosity.

But he still wanted to do more, Dukes said. As a result, he and Heang put their heads together and came up with Water Aid for Cambodia - a project to establish water pumps and clean water for Cambodian villagers.

Since last July, 48 wells have been established and it has worked like a snowball effect, he said.

"After my trip in July, I went back in November," Dukes said. "I found aqueducts were made for the vegetation of gardens. They not only have fresh water now, but also fruits and vegetables. It was awesome."

Students have also become aware of water scarcity in other countries.

"Water is a necessity for life and growth without it is impossible for a society to thrive," said Mary Butler, senior and agriculture business major. "Dukes is an exceptional person for providing water for these people."

Butler grew up on rice farm and has attended city water board meetings with her father Steve Butler, she said.

At the meetings, she gained a better understanding of the constraints that water limitations impose on irrigation and the flow of society, Butler said.

Water shouldn't be taken for granted in America either.

"There was almost a water shortage this year," said Steve Butler, president of the board of directors of the water board. "But thankfully there isn't one."

"Wells are the first source that we turn to," Steve Butler said. "They are a very important resource."
Posted by CAAI News Media at 9:58 pm