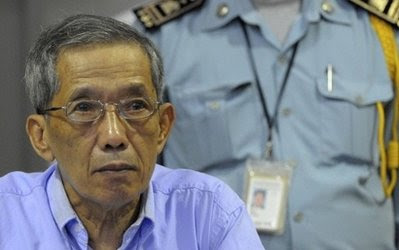 Former Khmer Rouge prison commander Duch, real name Kaing Guek Eav, is pictured at the Extraordinary Chamber in the Courts of Cambodia in Phnom Penh. Duch has recounted his grisly past, telling the country's UN-backed war crimes court that confessions extracted under his torture orders were rarely true.(AFP/File)
by Patrick Falby – Tue Apr 7

Duch, whose real name is Kaing Guek Eav, last week apologised at trial for crimes against humanity, accepting blame for the extermination of 15,000 people who passed through the regime's notorious main prison, Tuol Sleng.

"I never believed the confessions I received told the truth. At most, they were about 40 percent true," Duch said Tuesday.

The grey-haired 66-year-old sat in the dock answering judges' and lawyers questions about M-13 prison, a secret jungle centre he ran from 1971 to 1975 during the Khmer Rouge insurgency against the then US-backed government.

Duch told the court that he only tortured two people at M-13, but regularly ordered his subordinates to beat prisoners who were destined to be "smashed" to death with a stick at the back of the neck.

When prosecutors pressed him on the figure, Duch conceded the number could be higher but he did not remember.

"In my heart I did not want anyone to face death. I tried to find ways to interrogate detainees and find ways to have them released. I tried my best," Duch said.

The Khmer Rouge were later in power from 1975 to 1979, the period when Duch is accused of supervising Tuol Sleng prison and sending thousands of people to their deaths in the so-called "Killing Fields".

The trial chamber is hearing evidence about M-13 to understand Tuol Sleng's organising structure, the personality of Duch and the relevance of his role to the Khmer Rouge leadership.

The former prison chief said Monday that he hated his role "detaining, interrogating and smashing" suspected spies at M-13 but he was afraid leaders would turn on him if he did not carry out orders.

However Duch told the court Tuesday he did not follow orders to torture French anthropologist Francois Bizot, who wrote about being detained at M-13 in his bestselling book, "The Gate".

"I could only inform to my boss Vorn Vet that these people (Bizot and two Cambodian assistants) were not CIA agents. They were really researchers," Duch said.

Many months later Khmer Rouge leaders decided to release Bizot, Duch said, making him one of just 10 prisoners who survived M-13. "Only the Frenchman was released. The two Cambodian people (arrested with Bizot) were kept under detention," Duch added.

Scholar Henri Locard said he doubted Duch was providing a full confession but that the former prison chief's exacting testimony was unique in a country where few accept responsibility for crimes.

"In Cambodian politics, I've never heard this," Locard told AFP at the court.

Duch said M-13 was surrounded by a bamboo fence and shackled prisoners were often held in two-metre deep pits, both to prevent escape and to protect them from US warplanes carpetbombing the area.

The former maths teacher has denied assertions by prosecutors that he played a central role in the Khmer Rouge regime's iron-fisted rule.

Duch faces charges of war crimes, crimes against humanity, torture and premeditated murder for his role in the regime. He faces life in jail at the court, which does not have the power to impose the death penalty.

Khmer Rouge leader Pol Pot died under house arrest in 1998, and many believe the UN-sponsored tribunal is the last chance to find justice for the regime which killed up to two million people.

The tribunal was formed in 2006 after nearly a decade of wrangling between the United Nations and Cambodian government, and is scheduled to try four other senior Khmer Rouge leaders after Duch's trial.
Posted by CAAI News Media at 7:25 am