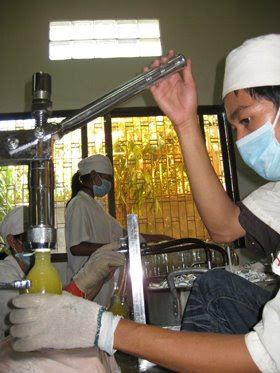 PICH Chan, general manager of Khmer Mekong Food Enterprise, walked into a supermarket in Phnom Penh in 2003, and he was dismayed.

He counted 90 different products that had been imported from neighbouring countries that could have been made in Cambodia.

"I wanted to see a Khmer product at markets," he said. "My friends and my relatives said my juice was good, so I started to think about producing juice for the market."

In late 2005, Pich Chan invested US$40,000 in a fruit-juice processing enterprise, and now four years later, his business produces juice from mangoes, pineapples, tamarind and guavas.

With eight workers, Khmer Mekong Foods is a small business only producing about 50 cases of juice a day. A case, which holds 24 bottles, is sold to retailers for $7, according to Hok Sovanna, Khmer Mekong Food's marketing manager.

But Hok Sovanna says Cambodians are starting to acquire a taste for fruit juice after initially shunning it.
"Now Cambodians have started to accept its flavour with up to 80 percent natural fruit," he said.

But despite increasingly positive feedback about the product, in 2007, Khmer Mekong Food lost $60,000.
Pich Chan blames the losses on his own lack of marketing expertise.

"I only have skills at producing not at selling, that's why poor marketing is our weak point" he said.

Also, as a small enterprise, Pich Chan says it has been impossible for his company to break into the international market because he cannot produce enough bottles to fill a shipping container, which is necessary to supply countries like the United Arab Emirates, Canada and the United States.

"I was sad to hear that they need one big container per month. I regret that I could not meet their demands," he said, adding many other Khmer agricultural products face the same limitations.

In the next one to two years, Pich Chan hopes to expand his company so he will be able to export his product overseas.

But the economic crisis has hit his company hard. Since late 2008, sales have dropped between 30 and 40 percent from the same period last year. Nevertheless, Pich Chan says that by continuing to improve the quality of his juices and diversifying his product line he will be able to increase Khmer Mekong Foods' market share in Cambodia.

In order for him to follow through with his expansion plan, however, Pich Chan says the company will need to borrow money. But, he says, Cambodian interest rates are too high at up to 12 percent per year.

"There are a lot of things to produce, but I don't have the capital. I need to find which bank has a low [interest] rate," he said.

Pich Chan said that he wished Cambodia had a bank with an especially low rate for small and medium-sized enterprises.

"I need a chance to borrow money to improve my business," he said.

Inside Business is a new section every Wednesday that will profile Cambodian small and medium-sized enterprises.
Posted by CAAI News Media at 11:15 pm

Similarly it is easily-known, antioxidants act as a key office in medical backgrounds are now offer
these procedures. Carrots, wheatgrass and Barley rat experience many outstanding Wellness properties.
The grapefruit juice diet has roots that is recommended to peel off off the
skin from the carrots. lilliputian did we know that and you are on your way to tone soil.