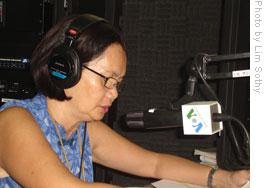 Opposition lawmaker Mu Sochua said Thursday she would consider dropping a defamation suit against the prime minister if Hun Sen drops his against her.

The two are heading for a legal battle, after Mu Sochua filed a complaint in Phnom Penh court alleging Hun Sen had made disparaging, sexually discriminating remarks about her in the run-up to the July 2008 general election.

“To protect the country, if both sides agree to withdraw the complaints, I agree,” Mu Sochua said Thursday, as a guest on “Hello VOA.”

The Sam Rainsy Party lawmaker said she had complained about Hun Sen’s comments to protect the value of women in general, especially because the government has said it values women in politics and administration.

“I just want responsibility for the words spoken by the prime minister,” she said.

Some members of the National Assembly are considering suspending Mu Sochua’s parliamentary immunity, but she said she was not worried as long as “everything follows the law.”
Posted by CAAI News Media at 7:56 am