Myanmar hits back at critics of Suu Kyi trial 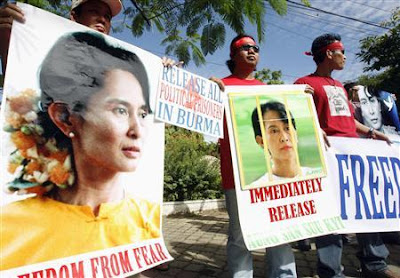 YANGON (Reuters) - Army-ruled Myanmar lashed out at foreign critics of Aung San Suu Kyi's trial on Thursday, accusing them of meddling in its affairs and denying the prosecution of the opposition leader was a political or human rights issue.

Deputy Foreign Minister Maung Myint rebuked his counterparts from Southeast Asia and Europe at a meeting in Cambodia, saying the trial that could jail Suu Kyi, 63, for up to five years was an "internal legal" issue.

"It's not political. It's not a human rights issue, so we don't accept the pressure and interference from abroad," Maung Myint told the ministers at the Phnom Penh meeting.

It was the military regime's strongest reaction yet to international outrage at Suu Kyi's trial on charges that she violated her house arrest by harbouring an uninvited American intruder in early May.

The Nobel laureate denies the charges, which critics say are aimed at keeping her in detention during an election next year that they say will entrench the generals' power after nearly a half century of military rule.

The trial was adjourned to Monday after the court heard from lawyer Kyi Win, Suu Kyi's only defence witness after three others were rejected by the judge without a reason being given.

Activists said it was the latest attempt by the regime to sabotage Suu Kyi's defence since the trial began nine days ago.

Nyan Win, one of Suu Kyi's lawyers, said the court agreed to allow them to meet her privately on Saturday to discuss her defence. Final arguments are due on Monday.

"If everything goes according to the law, we must win," he said after Thursday's closed session inside Insein prison.

No date for a verdict was set, but a conviction is widely expected in the former Burma, where the courts routinely bend the law to the suit the generals.

Suu Kyi's supporters have quietly gathered each day near the prison ringed by armed police and barbed wire barricades.

There have been no major protests so far, but police arrested a lone protester at a market near the prison on Thursday.

Zaw Nyunt, a 56-year-old retired air force officer, held up a poster with the words "Saving Suu is Saving Burma" in English and Burmese. He was quickly packed off by pro-junta thugs and plainclothes police, witnesses said.

Suu Kyi has spent much of the last two decades in some form of detention, mostly at her lakeside home under police guard, her phone line cut and visitors restricted.

Myanmar's generals, the latest in an unbroken line of military rulers since 1962, have ignored the international outcry over her trial.

In Phnom Penh, European and Southeast Asian ministers issued a final communique calling for the release of all political prisoners and said all political parties should be allowed to join next year's elections "in a free and fair manner."

The American intruder, John Yettaw, whose swim to Suu Kyi's home on May 4 triggered the trial, told the court on Wednesday he had a "vision" that Suu Kyi was assassinated by "terrorists" and had wanted to warn her.

"God sent me to warn her," Nyan Win quoted him as saying.

Suu Kyi has denied any prior knowledge of his plans and said she did not alert authorities for fear he would be arrested. She has also blamed the incident on a security breach, for which no officials have been punished.

"The fact that I am the only party being prosecuted shows the partiality of the prosecution," she said in a written statement to the court this week.

(Additional reporting by Martin Petty in Phnom Penh; Writing by Darren Schuettler; Editing by Alex Richardson)
Posted by CAAI News Media at 8:30 am